A Light on the Hill by Connilyn Cossette ~ Review 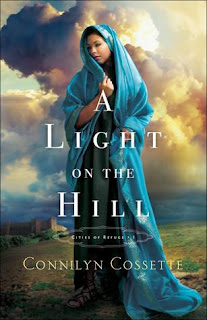 Moriyah is the only unmarried daughter of a successful vineyard owner, but she hides the scar on her face with a veil, the reminder of when she was kidnapped and taken to a pagan temple before the walls of Jericho fell granting her, Alanah, and Rahab freedom. The brand burned into her skin is like that of the temple prostitutes, and though she was never defiled she lives with the shame of the mark on her face. When her father makes a match for her, she agrees to the marriage to please her father and put his heart at ease. But then tragedy strikes, sending her fleeing for her life to one of the refuge cities with her father's most trusted men at her side, but as they face those who would claim their right of blood she finds herself trusting her life to Darek, the brother of the man whom she has wronged.

A beautiful novel of retribution, forgiveness, and love, set a few years after the fall of Jericho as the Israelites have divided and begun to take possession of the land promised to them. The descriptions are rich adjectives that paint a picture in the mind with vivid evocative imagery, that add depth to the story and set the scene. Riveting storytelling, and compelling characters bring this story of the refuge cities to life. I was intrigued by the use of the refuge cities in this book, as the Bible doesn't contain any histories of anyone who took refuge in such a city, despite their designations and rules being well outlined in the Old Testament. I was completely blown away by how Ms. Cosette brought the refuge cities--which is a part of the Bible that I admittedly don't linger over--to life, I was captivated by Moriyah's plight, as well as her courage.

The characters were well developed, and even characters that were featured only briefly like Eitan, Ora, and Rimona, were crafted with care and had me wondering about their stories. I thought that this book was well done, I had a tough time putting it down, and I am a huge fan of the original concept of the refuge cities.

Moriyah is brave, yet vulnerable, my heart went out to her, yet I admired how instead of becoming bitter over her circumstances and scars, her scars allowed her to see invisible people like Ora and Eitan, befriending outcasts. She grows a lot over the course of the book, and I like how she takes responsibility for her actions, even though she could easily have been indignant and in denial, but bravely faced her trials.

Darek has scouted out the promised land and seen many beautiful things, he believes in justice and mercy, and despite his doubts and misgivings is always respectful to everyone. I liked his willingness to listen, and quick thinking in moments of crisis.

Overall, a thoroughly engrossing read from beginning to end. I loved the originality of writing about the refuge cities, as well as the vivid and lush descriptions. I loved Moriyah, and admired her strengths and vulnerabilities, and how she grew over the course of the book. One of the best Biblical fiction books I have ever read. Highly recommend.

Disclosure of Material Connection: I received one or more of the products or services mentioned above for free in the hope that I would mention it on my blog. Regardless, I only recommend products or services I use personally and believe will be good for my readers. I am disclosing this in accordance with the Federal Trade Commission's 16 CFR, Part 255: "Guides Concerning the Use of Endorsements and testimonials in Advertising."
Posted by Faith at 11:57 PM