Bending Toward the Sun by Mona Hodgson ~ Review 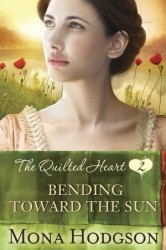 Review: Emily Heinrich's father, Johann, owns the general store in town. It has been just the two of them for many years, and he is very protective of his only child, which is why when he sees Emily talking to Quaid McFarland he is far from pleased. As far as Johann is concerned Quaid has three strikes against him.

But Quaid is so much more than that, he is a man of honor who would never dream of hurting Emily by coming between her and her father. Is there still a chance for love to grow?

This is a tale that fits perfectly as a novella, with both new and returning characters. Ms. Hodgson did an excellent job of capturing the feel of what it was like to live and work in a rapidly growing town along the Mississippi River after the Civil War.

Both Emily and Quaid were likable main characters, and I loved how they had such a huge respect for him despite their disagreements. One of my favorite characters actually ended up being Emily's father, Johann, because he had such love his heart for his daughter, and only wanted what was best for her.

Overall, this was a sweet story and actually my favorite of the series. I would happily recommend the entire series to fans of historical fiction.