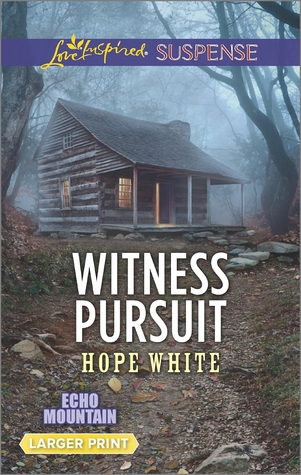 When Cassie McBride stumbles upon a crime scene in a rental cabin, she becomes the killer's next target.

Nick Walsh is a good friend of Cassie's brother, and the police chief in Echo Mountain, so when he get's the call he rushes to her side. He realizes that the killer knows who she is and where she lives so he offers to help out by looking in on her when he can.

Will Nick and Cassie be able to stop the killer before it's too late?

I like Cassie's positive attitude, despite suffering from a painful childhood illness, she always looks on the bright side, and trusts in God. Cassie longs to see the places that she read about in books, which is how she finds herself  working on Echo Mountain.

I liked the action and suspense in this mystery, the killer think that Cassie has something that they want, but Nate and Cassie have no idea what they want or why. Cassie refuses to let Nate handle everything on his own, she wants to help him catch the killer, and prove that she is worthy of her hard won independence.

I really liked the interaction between Nate and Cassie, and how he supports her encouraging her to let her family know how she really feels about their smothering ways.

Nick is a good police chief, he sometimes feels old and cynical, especially around Cassie, and he knows that she deserves someone better, but despite his efforts to keep his distance he finds himself drawn to the ever hopeful Cassie.

Overall, an action packed read that had me hanging on tight. Cassie was my favorite for her determination to make the best out of every situation. Great mystery that kept me guessing throughout!

Disclosure of Material Connection: I received one or more of the products or services mentioned above for free in the hope that I would mention it on my blog. Regardless, I only recommend products or services I use personally and believe will be good for my readers. I am disclosing this in accordance with the Federal Trade Commission's 16 CFR, Part 255: "Guides Concerning the Use of Endorsements and testimonials in Advertising."
Posted by Faith at 10:59 PM