For Us Humans by Steve Rzasa ~ Review 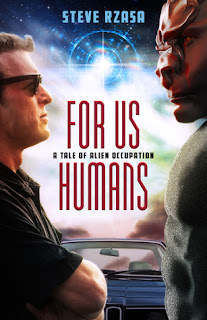 My Review:
Caz Fortel and the rest of humanity's lives changed forever the day the aliens came, now referred to as 6/16. Caz makes a living dealing in stolen art, and getting it back to the rightful owners, so when he gets a call from the FBI with a million dollar payday, he signs on to retrieve the microscopic alien artwork. The catch is that he won't be alone, he will be partnered with a four armed alien Hounder, with a terrific sense of smell, named, Nil, who has more than a passing interest in Christianity.

But their mission is more than it appears, and as the danger increases, Caz begins to question the decisions he's made, and the implications of what their mission means for the Consociation and Humanity.

Imaginative, action-packed, and set in a world fifteen years after the aliens came to earth. Mr. Rzasa does a terrific job of bringing this alternate reality to life, setting this high-tech, action-packed adventure in Wyoming. Caz has been struggling with his faith since the aliens came on 6/16, like many others he finds it hard to trust after everything that they have seen. He hides his doubt with a bravado filled facade, and a penchant for drink and casual flings. But there is one girl who he can't seem to erase from his memories.

Nil is a four-armed alien, with strength that is magnificent in Earth's gravity field, he also has a remarkable sense of smell. His gruff exterior, and high tech gadgets help him come bounding to the rescue when Caz needs some help. But underneath it all he is not as expected, and specifically requested that he be partnered with a Christian human. Nil is used to being resented for how the aliens came fifteen years ago, and started becoming a fixture in the culture, he has heard of Christianity and wants to see it up close on Earth.

For Us Humans is an adventurous romp through Wyoming in a world where humans and aliens walk side by side. I'm not the biggest sci-fi reader, but this book hooked me, though I will admit that at times it was hard to keep up with the action sequences, and there were times when it was a bit slow moving. There was great characters, and I liked that Caz beneath his tough exterior, had real struggles and problems, without easy answers. Nil is fantastic, and in many ways a lot like Caz. An adventurous speculative read, with a great spiritual foundation. If this interests you, I would definitely check it out, I don't think you'll be disappointed!


Disclosure of Material Connection: I received one or more of the products or services mentioned above for free in the hope that I would mention it on my blog. Regardless, I only recommend products or services I use personally and believe will be good for my readers. I am disclosing this in accordance with the Federal Trade Commission's 16 CFR, Part 255: "Guides Concerning the Use of Endorsements and testimonials in Advertising."
Posted by Faith at 5:16 PM