The Cost of Betrayal by Dee Henderson, Dani Pettrey, and Lynette Eason ~ Review 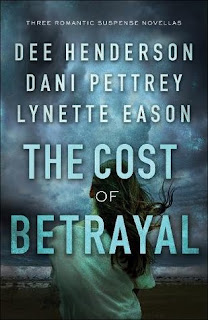 Betrayed
Ann Falcon and her husband, Paul, who works for the FBI, work together to solve a case after Ann finds a pocket knife among the things that she buys at an auction. As a former investigator Ann can't shake the feeling that she is onto something, and a great injustice has been done.

Janelle Robert is a free woman after serving 6 years of a  20 year sentence for a murder that she didn't commit. But the real killer is still at large.

The Falcon's make arrangements for Janelle to spend time on and island with a friend of theirs who is a doctor, Greg Tate who helps people who have dealt with traumatic events. I like that Greg is a very open and frank with Janelle, he is open to talking at any time, and has a dog named Mario.

Janelle has a strong faith and her faith helps her get through her difficult ordeal, she learns things about herself too while on the island. I really liked her strength and how the friendship between Greg and Janelle grows.

Deadly Isle
When storms trap Tennyson Kent on the island where she grew up she must rely on the help of her childhood friend Callen Frost. All communication with the outside world is lost and a murderer is at large on the island. Will Callen and Teni be able to catch the killer before it's too late?

Teni is a NRP officer who specializes in underwater investigations, when she finds her cousin's body in the water she insists on processing it herself, staying strong to help find her cousin's killer.

Callen and Teni have known each other for a long time and they were each other's first loves. Callen has a strong faith, and his first priority is keeping Teni safe.

An intense thriller against the backdrop of a ferocious storm. Strong and daring heroes, make this fast paced read almost impossible to put down!


Code of Ethics
Ruthie St. John is a trauma surgeon from a family of law enforcement members. After saving Isaac Martinez's life, she goes to check on him and finds a stranger in his room. She agrees to help him out of the hospital undetected as the other officers won't help him, and he reported his suspicions. Now someone is determined to silence Isaac, and Ruthie is a key witness. Can Ruthie help Isaac clear his name and expose the dirty cops?

Ruthie and Isaac share a strong sense of moral right and wrong along with their faith. I liked how they get to know each other over the course of the book, and Ruthie's willingness to help keep him safe.

Action packed, with an explosive ending that you won't want to miss. This story is also a special bonus for fans of the St. John family in Ms. Pettrey's previous novels!

Disclosure of Material Connection: I received one or more of the products or services mentioned above for free in the hope that I would mention it on my blog. Regardless, I only recommend products or services I use personally and believe will be good for my readers. I am disclosing this in accordance with the Federal Trade Commission's 16 CFR, Part 255: "Guides Concerning the Use of Endorsements and testimonials in Advertising."
Posted by Faith at 12:01 AM