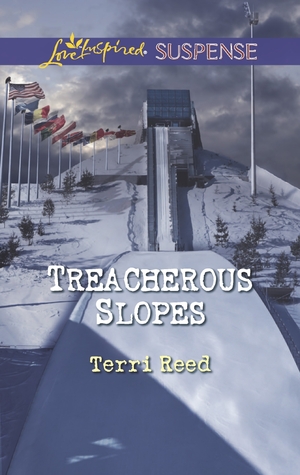 Nick Walsh is gearing up for the Ski Jump competition of his life, with one thing in mind to win gold for his late brother. But when reporter Julie Frost insists on writing a story on him, it complicates things. Nick has never liked reporters since his brother's death when reporters made his brother out to be a drug addict, and falsely smeared his brother's name on every newspaper sports section.
But suddenly new evidence comes to light that could clear and Nick's brother and lead them to an even more frightening truth.

Full of suspense and mystery, Treacherous Slopes makes for a hard to put down read with two great main characters that were very well developed.

Nick struggles with coming to terms with his brother's death and the aftermath in the media. And in Julie he meets his match.

I don't want to give too much away, but this was a terrific read, perfect for getting you excited for the upcoming Sochi 2014 Olympics! I would definitely recommend this book because of it's great message and plot that made it nearly impossible to put down!


Disclosure of Material Connection: I received one or more of the products or services mentioned above for free in the hope that I would mention it on my blog. Regardless, I only recommend products or services I use personally and believe will be good for my readers. I am disclosing this in accordance with the Federal Trade Commission's 16 CFR, Part 255: "Guides Concerning the Use of Endorsements and testimonials in Advertising."
Posted by Faith at 11:52 AM