You'll Think of Me by Robin Lee Hatcher ~ Review 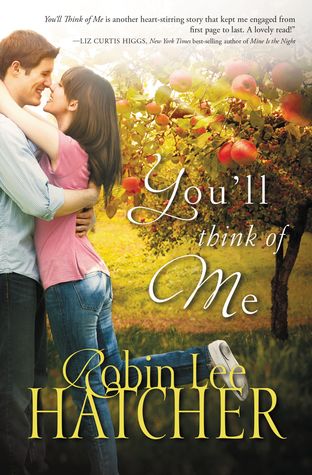 
Derek Johnson get's a letter from his dying childhood friend, Chad Hallston, that changes his life forever. Chad leaves him the Hallston land that borders Dereks's, and asks him to be a father figure to his daughter Alycia. But Derek has always resented Brooklyn, Alycia's mother, for coming between his friendship with Chad.

Brooklyn Myers married Chad at seventeen, but he left when she found out that she was pregnant with Alycia. Her neighbor Ester, has been an angel in disguise these past years, and when Brooklyn get's the news that Chad has died and left his home to Alycia, Ester encourages her to go home and look at it as a blessing.

Alycia is a lovely child, friendly and respectful, she spends a lot of her time reading on her kindle. She accepts her mom's decision to move and tries to help make the transition easier, she bonds quickly with Derek and his animals.

Derek is surprised at how quickly he befriends Alycia, he is a hardworking man who does his best to do help Brooklyn and Alycia adjust to their new home. He sees the struggles that Brooklyn has overcome and begins to admire her strength and refusal to let her circumstances define her. He stands up for Brooklyn in front of her father, and makes a point of being there for her and Alycia.

I loved Ester and Ruth, who help bring Derek and Brooklyn together, they are both strong women of faith who serve as mentors and confidants, who do much encouraging along the way.

I really loved the interaction between Brooklyn and Derek, they are both two people burned by the past who don't believe that they deserve a happy ending. Derek really opens up and begins to pray about his disappointments and the way that he has reacted to them. A fantastic story about second chances and finding hope.

Disclosure of Material Connection: I received one or more of the products or services mentioned above for free in the hope that I would mention it on my blog. Regardless, I only recommend products or services I use personally and believe will be good for my readers. I am disclosing this in accordance with the Federal Trade Commission's 16 CFR, Part 255: "Guides Concerning the Use of Endorsements and testimonials in Advertising."
Posted by Faith at 5:01 PM