The Shock of the Night by Patrick W. Carr ~ Review 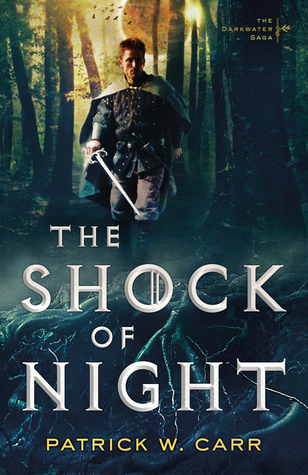 
Willet Dura is King Ladir’s trusted reeve, the lowest of the titled, and engaged to marry his beloved Gael, yet he is still haunted by the war. He has a mysterious gift for knowing when someone will be murdered and is always the first on the scene, he fears that his involvement may be more than simply coincidental, yet he has a strange fixation with death and the live after.

The death of an elderly priest changes his life forever when he receives a rare gift, hidden for ages, that puts his well-planned future in jeopardy, but also brings responsibility and greater thing than Willet could have ever imagined.

Though this is the first book in the series, I highly recommend reading the free e-book novella By Divine Right, first. The reason is because while typically you could ignore the prequel novella, I found that while I was reading Shock of the Night, that there were many references to how Willet had earned the esteem and disgust of his acquaintances, and I felt like I was reading the second book in a series even though it was the first. After I finished this book, I went back and read By Divine Right and found that it filled in a lot of things, and answered many questions that I had, as well as giving more insight into Willet’s relationship with Gael, and helped me understand more of how Aer’s gifts were given and worked within the realm of this book.

This book jumps right into the story, and though it did take me a bit to figure out who everyone was and what was going on, (reading the prequel first will help with this), I felt that it was an engaging read from the start. Willet is a compelling and intriguing hero, mysterious in ways even to himself; he is a seeker, survivor, clever, loyal, and at times reckless. I liked how even though he has his secrets, he is a natural leader even if he doesn’t see it in himself, his demeanor commands respect despite his at times rash decisions. He treats others with respect as well, like the urchins who live off the streets and his warm friendship with the librarian, Custos. Though I wish there had been a bit more dialog with Gael so that we could see more of their relationship in real life beyond Willet’s high regard for her when he dreams of his future with her.

Bolt is another of my favorites, honor and duty bound he smart and observant, willing to go against the grain and trust his gut when he needs to, and a faithful friend. Even though Willet put him to the test, he in turn respects Willet for it, and in fact they are men of a similar bent.

It is interesting how much of this book is told from Willet’s point of view in first person narrative, while a few short chapters are told in third person about Pellin the uneasy new Eldest of the Vigil.  I felt that the style worked well for the story. Mr. Carr does an excellent job of creating a fantastic world, well balanced with blessings and consequence. Intricate, and captivating, I love how it makes you think about things, and as the reader you aren’t just along for the ride. I would definitely recommend this book for fans of fantasy and speculative fiction, I’m very excited to see where this series goes.

Disclosure of Material Connection: I received one or more of the products or services mentioned above for free in the hope that I would mention it on my blog. Regardless, I only recommend products or services I use personally and believe will be good for my readers. I am disclosing this in accordance with the Federal Trade Commission's 16 CFR, Part 255: "Guides Concerning the Use of Endorsements and testimonials in Advertising."
Posted by Faith at 6:06 PM