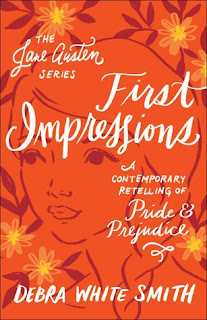 Mrs. DeBloom moved to London, TX 3 years ago with her nephew Dave Davidson, and she is determined to bring culture and appreciation of the arts to town, so they will be putting on the play Pride and Prejudice. Eddie Bowick is new to town and hopes that taking part in the play helps her meet more people in the community.

A full cast of characters in this contemporary retelling of Jane Austen's classic.

Calvin Bardclay is the town vet, and he is a good friend of Dave's, he is excited about being in the play, unlike Dave who is doing it to pacify his aunt. Calvin teases Dave about Eddi, but he says many unfavorable thing about her which Eddi happens to overhear.

Jenny is Eddi's sister, she's a coach at the community college and she comes with Eddi to practice, where she meets Calvin.

Meanwhile Eddi's mother is very motivated to marry off her daughters to rich men, so she is constantly involved in trying to arrange her daughter's love lives. Eddi's younger sister, Linda, bring home Rick Wallace who has disparaging things to say about the mysterious Dave.

Overall, it is pretty obvious that this is a retelling of Pride and Prejudice, and any fan will immediately be able to figure out who is who and so on, in fact reading this review you've probably got a pretty decent idea. But I think it might have been so close to the original storyline in ways that it was a difficult transition to modern day culture, and there were parts with Linda and Rick that were more PG-13 and hard to read.

Disclosure of Material Connection: I received one or more of the products or services mentioned above for free in the hope that I would mention it on my blog. Regardless, I only recommend products or services I use personally and believe will be good for my readers. I am disclosing this in accordance with the Federal Trade Commission's 16 CFR, Part 255: "Guides Concerning the Use of Endorsements and testimonials in Advertising."
Posted by Faith at 10:36 PM