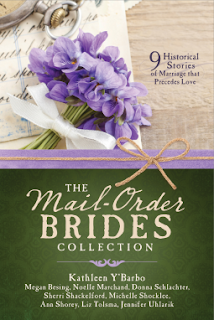 Perfect for the Preacher
In order to secure the job as pastor of a congregation, Amos must get married, so he places an ad. Sophie was raised by a kind preacher and his wife, and they encourage her to answer the ad. But Amos doesn't have the job just yet, so when Sophie arrives he is not prepared. An older couple takes her in, while Sophie wonders if Amos still wants to marry her after all.

The Outlaw's Inconvenient Bride
Wyatt is an undercover Pinkerton agent, and he can't just stand by and let a girl unsuspectingly marry an outlaw, the very outlaw he is trying to peg down. So he offers to marry her instead. Myriah sees that Wyatt isn't like the others, and there is plenty of great interactions.  Wyatt admires Myriah's ability to adapt to the difficult situation, and he honors their marriage even though he can't tell her the truth just yet.

Train Ride to Heartbreak
Mary and John meet on the train to Heartbreak, they don't exchange last names so it isn't until they arrive that they figure out that she is the woman who answered his ad. The train has many unforseen layovers and is woefully behind schedule, but it gives Mary and John plenty of time to get to know each other. John is quick to volunteer to help out, and Mary cares for the little ones. Will the bond they've formed last?

Mail-Order Proxy
Nothing goes as planned in this humorous story. Delia plans a double wedding by proxy. Delia and Sean disagree about everything, he wants to step up and protect her, but she is determined to to follow through with her plans to interview an outlaw. Will they have a happily ever after in the end?

To Heal Thy Heart
Dr. Luke is excited at the thought of marriage and a family. Phoebe answers his ad because it is the last option for her after her father and fiance died fighting for the Confederate. Dr. Luke isn't thrilled to have a Southern wife, after having serving as a doctor for the Union. But as they get to know each other they wonder if love can bridge the divide between the states.

Miss-Delivered Mail
When Helena finds a letter in the trash, she read it and finds that there is a man expecting a mail-order bride. Helena is touched and goes to meet Daniel. When Daniel discovers the deception he refuses to marry Helena and takes her to stay with the Hallidays, who welcome her with open arms. Daniel is stubborn, but when he sees Helena's kindness, resourcefulness and characters he wonders if she might still give him a chance.

The Fairytale Bride
Nora and her step-sister answer mail-order bride ads from the same town, but only one groom shows up. The groom has a houseful of rambunctious children, and Nora ends up doing most of the housework and watching the children while Maude complains. Josiah has a prosthetic leg, and he got nervous and stood Nora up, but as he get's to know her, he hopes that she will give him a second chance.

The Brigand and the Bride
Del is a man on the run, and Jolie needs a husband. Jolie is expecting a groom, and has a very detailed plan to wed because the preacher being in town only a few days. Mistaken identity leads to their marriage, and as they comes to terms with their union, they finds that they might be just what the other needs.

The Mail-Order Mistake
Neither Jeremiah or May are planning to marry. Jeremiah is a Pinkerton agent on a mission to shut down a mail-order bride scam. May lost her home in a fire, the neighbors take her in, and lock her up forcing her to reply to multiple adverts for a bride. May wants to help Jeremiah put a stop to the scam. Action packed and full of great interaction this is an enjoyable adventure.

A fun collection of stories with brides and grooms from all over, making the best of a sometimes surprising situation.


Disclosure of Material Connection: I received one or more of the products or services mentioned above for free in the hope that I would mention it on my blog. Regardless, I only recommend products or services I use personally and believe will be good for my readers. I am disclosing this in accordance with the Federal Trade Commission's 16 CFR, Part 255: "Guides Concerning the Use of Endorsements and testimonials in Advertising."
Posted by Faith at 12:33 PM