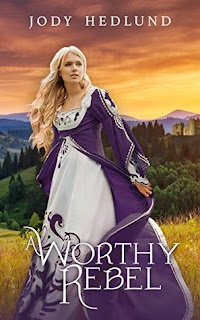 Lady Isabelle has always felt like she was in her sister, Olivia's shadow. She is titled, but penniless, and now she has the opportunity to marry in order to provide for her people. But when her perspective husband turns out to be a wretched, sadistic man, Thomas Neville, she flees his castle intending to take refuge with her sister.

Cole Warwick is the son of a woodcutter, and tenant of Neville, he has inherited his father's woodcutting license and does what he can to care for his sister and mother. He and his friends are training to defend themselves against Neville's unfair and violent practices.

When Cole finds Izzy in the woods, injured, he brings her home where his mother and sister help to care for her. Izzy is hesitant to reveal her true identity, but with each passing day she comes to admire Cole and his heart for others. Can Izzy and Cole find a way to help the villagers, and protect them from Neville's violence?

The 5th book in the series, it stands well on it's own, but couples well with the previous book which centers on her sister, Olivia. I didn't even know this was coming, and to be honest had kind of thought the last book was the final of the series, so you can imagine my delight when it was announced that Ms. Hedlund was releasing a 5th and final story in this series.

Action packed, with a Robin Hood-like feel to it, this was a coming of age story about Izzy, who we were briefly introduced to in the previous book. She has a big heart for others, especially children, I loved her friendship with Cole's sister, Posy, and how she encourages her to see herself as beautiful. Izzy finds her strength fighting for her voice and say in her life.

Cole is a born leader, he loves his family and doesn't want anymore than to be treated fairly. He is a hardworker, and very brave.

Overall, this was an enjoyable read with a climactic ending, admirable heroes. I really liked getting to know Izzy better, as well as reading about the devoted Cecil. The villain was absolutely vile. A great read for fans of the other books in this series.

Disclosure of Material Connection: I received one or more of the products or services mentioned above for free in the hope that I would mention it on my blog. Regardless, I only recommend products or services I use personally and believe will be good for my readers. I am disclosing this in accordance with the Federal Trade Commission's 16 CFR, Part 255: "Guides Concerning the Use of Endorsements and testimonials in Advertising."
Posted by Faith at 5:17 PM