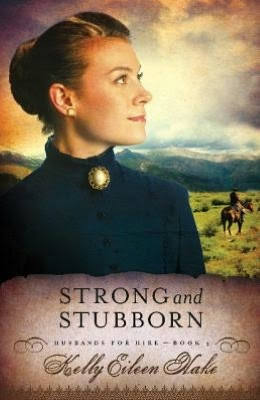 The third in the Husbands for Hire series the mine is being riddled by mysterious explosions and cave ins. Along comes Michael, a carpenter in search of a safe place for his son away from his overbearing in-laws. But Michael isn't looking for love, especially after being roped into a marriage of convenience in the past. But he and Naomi find themselves drawn together amidst the turmoil at the mine, made even worse by Naomi's manipulative sister coming to town. Will they ever be able to make sense of all the chaos?

If you've read the other two books, I'm sure that this is a must-read! I came into the series with this third installment, so it did take me awhile to figure out what was going on. But when I did, I found this to have an engaging plot and plenty going on, with many twists and turns.

What made this book hard for me to read was just how horrible Naomi's sister was, she was a character that readers will probably love to hate. The main characters were strong, and I really liked Michael and Naomi and they both struggled to thrive in the midst of  adversity and people that made their lives miserable.

Overall, a good way to tie up the ends of a series. I think my favorite character was Michael, because he had a calm leadership about him, and a strong faith. There were some pretty humorous situations, that were just the funniest to picture mentally. A great introduction to Kelly Eileen Hake's books.

I received this ebook from the publisher in exchange for an honest review. Thank you!
Posted by Faith at 11:16 AM