Billy Stone and his best friend Allie find a powerful medallion in the woods, a power that has motivated men to kill for it in the past. Billy and Allie must keep the medallion out of the wrong hands and restore it to the rightful king.

A well written children's novel filled to the brim with adventure around every corner and great lessons in friendship, leadership, faith, and true power.

This book surprised me, because I didn't really expect where it was going, so there were a lot of fun surprises. I think that this would be a great book for kids ages 8-12, as there is some violence, though it is not explicitly described.

I gave this book to my brother who read through it within the matter of a few hours and he really enjoyed it and thought it would a fun movie to see and a great book for younger kids or for families to read together (my brother is 17).

Overall, I would have to say that if you know a kid who loves adventure and good admirable heroes, than this would be a great book to put in their hands, especially before they see the movie!

Bill Muir is a popular speaker, an international award winning film maker and a sought-after consultant.

Having completed his new novels The Lost Medallion and A Hidden Treasure, Bill has turned his creativity to his new Children’s novel, Howdy Neighbors.

When Bill isn’t writing a novel, he’s busy directing and producing movies. He recently spent four months in Thailand filming, The Lost Medallion: the adventures of Billy Stone. The movie will be in theaters this fall. When he isn’t working on movies, he’s having fun with his family working their farm.

Alex Kendrick is associate pastor of movie outreach for Sherwood Baptist Church. He is also an actor, writer, and director whose film credits include Facing the Giants, Fireproof, and Courageous. He and his wife, Christina, have six children. 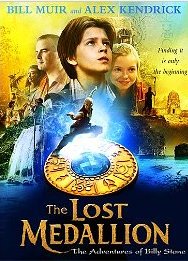 Archaeologist Dr. Michael Stone looked for the lost medallion his entire life, and now his son Billy has taken up the search. Amazingly, the medallion ends up in Billy's hands and a spontaneous wish in a precarious situation takes Billy and his best friend Allie, back 200 years to what they realize is a very different Aumakua Island. When Billy and his friends are not jumping off waterfalls, avoiding animal traps, crossing the ocean, sneaking through caves or escaping a prison they're facing their nemesis Cobra, who wants nothing more than for them all to disappear. With no other way to get home, and the well being of the entire island resting on his shoulders, Billy must discover the key to reclaiming the medallion and its tremendous power. One way or another, this adventure will change Billy, and life on the island, forever. Best-selling author and film director Alex Kendrick (The Love Dare, Courageous) and Youth for Christ veteran Bill Muir bring us this exciting novelization of The Lost Medallion movie.

If you would like to read the first chapter of The Lost Medallion, go HERE.