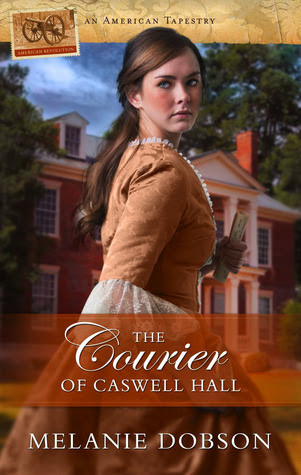 A full cast of characters both real and fictitious blend together seamlessly to bring the Revolutionary War to life.

Lydia pulls a mysterious stranger from the river, who changes her life forever.

The main plot of the book is greatly enhanced by the subplots, and the many secrets that come to light over the course of the book. I loved the realistic-ness of the setting and story, and it made sense that Lydia and Nathan wouldn't see each other too often, as it was a time of war. So their interaction was limited, but that actually made a lot of sense to me, considering the circumstances.

One of my favorite characters was Sarah, whose story was heartbreaking and touching. Another character who shone brighter and brighter as the story progressed was Lydia's mother. And I greatly respected Elisha, a man who was a Caswell slave, but showed himself to be one of the stronger character who didn't let his position in the house prevent him from showing what he stood for.

Nathan was an honorable man, who was always thinking and using his head to get out of tight scrapes.

Overall, I loved how the touches of humor and faith were interwoven throughout the storyline, as well as the reminder that freedom isn't free. It was a bit slow to start, but by the end I was glad I picked it up!

About the book: An unlikely spy discovers freedom and love in the midst of the American Revolution.

As the British and Continental armies wage war in 1781, the daughter of a wealthy Virginia plantation owner feels conflict raging in her own heart. Lydia Caswell comes from a family of staunch Loyalists, but she cares only about peace. Her friend Sarah Hammond, however, longs to join the fight. Both women's families have already been divided by a costly war that sets father against son and neighbor against neighbor; a war that makes it impossible to guess who can be trusted.

One snowy night Lydia discovers a wounded man on the riverbank near Caswell Hall, and her decision to save him will change her life. Nathan introduces her to a secret network of spies, couriers, disguises, and coded messages---a network that may be the Patriots' only hope for winning the war. When British officers take over Caswell Hall and wreak havoc on neighboring plantations, Lydia will have to choose between loyalty and freedom; between her family's protection and her own heart's desires.

As both armies gather near Williamsburg for a pivotal battle, both Lydia and Sarah must decide how high a price they are willing to pay to help the men they love.

Part of the American Tapestries™ series: Each standalone novel in this line sets a heart-stirring love story against the backdrop of an epic moment in American history. This is the fifth book in the series.

About the author: Melanie Dobson is the author of twelve novels; her writing has received numerous accolades including two Carol Awards. Melanie worked in public relations for fifteen years before she began writing fiction full-time. Born and raised in the Midwest, she now resides with her husband and two daughters in Oregon.

Connect with Melanie at: http://melaniedobson.com

Check out all of the other great tour stops!  http://litfusegroup.com/author/mdobson
Melanie Dobson's latest release, The Courier of Caswell Hall, is a riveting story you won't want to miss. The newest offering in the American Tapestries™ series, it follows an unlikely spy who discovers freedom and love in the midst of the American Revolution.

Five winners will receive:
Enter today by clicking one of the icons below. But hurry, the giveaway ends on October 5th. All winners will be announced October 7th at the Litfuse blog.

Don't miss a moment of the fun; enter today and be sure to visit the Litfuse blog on the 7th to see if you won one of the books!