To Wager Her Heart by Tamera Alexander ~ Review 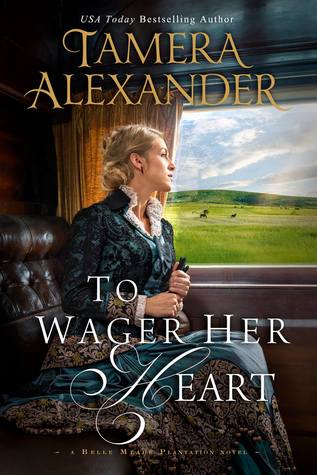 Alexandra Jamison wants to do something meaningful with her life to honor her late fiance who was killed in a tragic train wreck on Dutchman's Curve, David was a teacher, so Alexandra has decided to pursue teaching. But her father has other plans and wants to arrange for her to marry to off of his influential friends. When she comes across the choir from Fisk University, it inspires her to get a job there, when her father finds out he kicks her out of the house.

Sylas Rutledge comes upon Alexandra walking by the road and gives her ride despite her insistence that she can make it on her own. Sylas is the owner of a railroad line, he will be bidding on the chance to building the railroad to Belle Meade. He asks Alexandra to coach him in the Southern social graces, to which she is reluctant, especially after learning the identity of his step-father. As Sylas get's to know Alexandra he finds himself willing to do anything to win her love even if it means wagering her heart.

This is a well researched book full of lush and gritty history, it is based on some true events and follows the struggles of the Jubilee Singers and the barriers they face, especially to find the funds. I really liked Ella, who is a teacher at the university, Alexandra's roommate, and one the singers in the choir, and she proves to be a good friend.

I like the way the relationship between Sylas and Alexandra develops as he comes to Fisk for his lessons, he often comes bearing small tokens of affection. Sylas has always admired his step-father as a man of deep faith and integrity, and he is proud to be called his son despite the terrible accident at Dutchman's Curve. Hearing the Jubilee Choir Sylas feels a longing in his heart and realizes how far he's gone from his faith.

Alexandra is courageous and doesn't feel bad for herself, but focuses on her future and teaching her students. She comes to appreciate Sylas' friendship, and comes to admire the man that he is.

A great story with many characters and many intersecting stories, I loved returning to Belle Meade and was glad to see Uncle Bob still there training the horses. Definitely a must read for fans of Tamera Alexander!

Disclosure of Material Connection: I received one or more of the products or services mentioned above for free in the hope that I would mention it on my blog. Regardless, I only recommend products or services I use personally and believe will be good for my readers. I am disclosing this in accordance with the Federal Trade Commission's 16 CFR, Part 255: "Guides Concerning the Use of Endorsements and testimonials in Advertising."
Posted by Faith at 1:33 PM