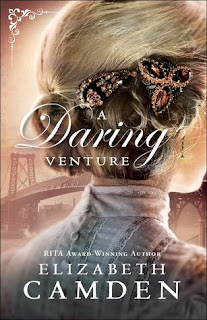 Dr. Rosalind Werner is a biochemist, with a passion for improving the welfare of communities so that they will not have to fear the diseases brought on by unclean drinking water. Rosalind fled scandal in Germany, and is fighting to prove herself in the experimental chlorination of public water. One of their fiercest opponents is Nick Drake, the plumber turned wealthy businessman.

Nick is just as passionate about the welfare of the community, but is skeptical of putting chemicals into public drinking water, with unknown long-term effects. He has fought to earn his place among the wealthy, but his knowledge of the inner workings of the water systems prove valuable assets as he fights to improve the lives of the poor.

Nick and Rosalind fight their attraction to each other, while fighting for clean water on opposing sides, does their love have a chance?

Who would have guessed that a novel about water purification would be this riveting? Elizabeth Camden has done it again, written a completely engrossing novel that I couldn't put down, well researched and full of historical details that enriched this romantic and suspenseful read. Probably one of my favorites by Ms. Camden so far, I picked this book up on my day off and couldn't put it down. I read it through in one day!

Rosalind is brilliant, a strong woman, clever, and well educated, she has a passion for preventing water-borne illnesses that took her parents and nearly took her brother, Gus. She fled from a scandal in Germany, does her best to avoid all appearances of impropriety while working in a field dominated by men.

Nick is back in the long awaited sequel to A Dangerous Legacy, where we are first introduced to the feud between the Drake families. Time has passed, and he has grown into his position of privilege, and is determined to use his wealth to improve the lives of others. He is widowed, and the father of a daughter, Sadie. As a newly monied man he finds it hard to be accepted in the higher reaches of society where much of the moving and shaking is done. He is an intelligent man who learned by experience, as he didn't have the opportunities for a higher education like the men that are now his peers. He is a man who burns hot, because he deeply cares, and wants to make a difference, though far too often it land him in trouble.

This is a fantastic read from beginning to end it was engaging, well-paced, with strong passionate protagonists that gripped my heart, and their flaws only made me love them more. There is conspiracy and intrigue, with high stakes legal cases, alongside romance, family drama, and hints of healing rifts. I liked how Rosalind and Nick, though often dealt a raw hand, still chose to be optimists and think well of others. A thrilling climax, and well done characters. An absolutely thrilling read, that I highly recommend!

P.S. I'm hoping that Eloise's story is in the making, as she is an intriguing young woman who definitely has a story to tell!

Disclosure of Material Connection: I received one or more of the products or services mentioned above for free in the hope that I would mention it on my blog. Regardless, I only recommend products or services I use personally and believe will be good for my readers. I am disclosing this in accordance with the Federal Trade Commission's 16 CFR, Part 255: "Guides Concerning the Use of Endorsements and testimonials in Advertising."
Posted by Faith at 1:30 AM