Until We Find home by Cathy Gohlke ~ Review 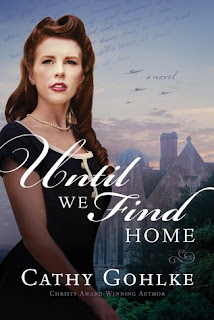 American Claire Stewart is thrilled to be doing her part, working with the French Resistance alongside her dear friend Arnaud, evacuating Jewish children. But when she finds herself stranded in England with 5 Jewish children, she throws herself on the mercy of her estranged Aunt Miranda, whom she has never met.

As Claire and the children settle into Bluebell Wood, they struggle to live in peace with the nearby villagers who aren't fond of Jews or Americans. As Aunt Miranda and her staff warm to Claire and the children, Claire finds herself feeling restless and trapped away from the frontlines, with little to inspire her writer's muse.

When fellow American David Campbell moves into Bluebell Wood as a boarder he brings cheer, captivating the children, and unsettling Claire who finds herself intrigued by the wise and charismatic David, questioning her feelings for Arnaud.

Until We Find Home is a beautiful tale set in the English countryside during WWII. Seemingly simple, without the intensity of the frontlines, the story is misleadingly unassuming. Claire struggles to care for the children, clothing and feeding is easy enough with the help of her aunt and Mrs. Newsome, but she holds herself back from holding them close in the absence of their parents. As Mr.. David and other Jewish children join them from Germany, she finds herself challenged by David and Mr. C.S. Lewis's writings and radio program, as the children capture her heart and bond together to make it through the war.

Claire isn't the most likable character in the beginning, but as the story progresses and we start to understand her life, everything makes sense and she is every bit the strong, loving, fierce, and compassionate heroine she was meant to be. I like how she and her Aunt Miranda's relationship grows, it is realistically slow to form, as they are both cautious, but so much more poignant because of it.

The children are precious, and it is impossible to resist the protective Josef, mischievous Gaston, and lovable Aimee, as well as the relationship that they have with each other and the other children. I like how Claire and the children coming to stay helped Miranda to start living more fully.

Overall, a fantastic read, I liked Claire's journey and how she came to understand that there was a reason for everything that happened, and wars aren't altogether fought on the frontlines. I liked how Claire was vulnerable and flawed, she wasn't perfect and selfless--in fact the opposite. But I related to her so much the more for it. David is mysterious, wise, and full of sunshine, and I like how he challenges Claire, and accepts her for who she is. I loved how Ms. Gohlke brought the English countryside of the 1940's to life, through the eyes of the evacuee children, with the loss, prejudice, boredom, and danger that came with it. A beautiful read from beginning to end, with great cameos from great contemporaries of the time, riveting, heartfelt, and well written. Highly recommend.


Disclosure of Material Connection: I received one or more of the products or services mentioned above for free in the hope that I would mention it on my blog. Regardless, I only recommend products or services I use personally and believe will be good for my readers. I am disclosing this in accordance with the Federal Trade Commission's 16 CFR, Part 255: "Guides Concerning the Use of Endorsements and testimonials in Advertising."
Posted by Faith at 6:01 PM