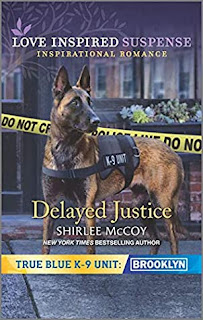 Lucie's Review:
When human interest journalist Sasha Eastman is threatened by a man who looks strikingly like her mother's murderer, even though he was caught 20 years ago, Detective Bradley McGregor and his K-9, King, step up to protect her.
A fast paced K-9 adventure that wraps up the True Blue K-9 Unit: Brooklyn Series. A quick read, filled with action, mystery and adventure. Because I had read the previous books in the series, the parts that were a continuation of the story thread running throughout the series, felt a little repetitive because of recapping.
Overall, this was an enjoyable read, with good protagonists, faith, and plenty of action.
I received a complimentary copy of this book. Opinions expressed in this review are completely my own.
Posted by Faith at 6:37 PM