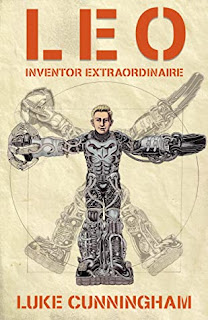 My Review:
LEO is a fun-filled, fast-paced, middle-grade adventure with a prodigy protagonist with a love of science and discovery.
Leo is an orphan living at a secluded boarding school, he is known as something of a troublemaker, with inventions known to have wreaked havoc on the school. Leo and his friend Savvy discover a network of underground tunnels with secret passwords and codes needed to unlock them. Leo hopes to discover the truth about his family and how he ended up at the Academy of Florence.
Leo finds himself swept into a dangerous world of espionage and innovation, joined by his created pets as well as new friends Beatrice and Rocky, as they fight to uncover the answers to Leo's identity.
This is a fun read, plenty of action, with quirky characters and plenty of humor. Rocky was one of my favorite characters, as he is something of a pokey older gentleman who tells it like it is. Leo is a genius inventor, but he is still a thirteen year old boy, which I thought that the author did a great job making clear. This book has twists and turns that kept me guessing, with short chapters that kept the plot rolling steadily throughout.
Overall, this was a wholesome read, with some gross out humor, and action-movie type violence for the most part against robots. It was an entertaining read, incorporating real science formulas, and pop culture. While published by Zonderkidz it isn't an explicitly Christian book, with a couple of references to Scripture mentioned on a similar level as that of a Beatles song, a passing phrase name dropping Job, and a few vague mentions of prayer, which overall was disappointing as I was hoping for more overarching themes of faith. An exciting middle-grade adventure, it also leaves the door open for a sequel, so it will be fun to see where it goes.
I received a complimentary copy of this book. Opinions expressed in this review are completely my own.
Posted by Faith at 12:00 AM