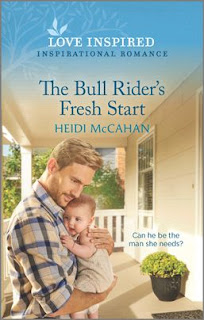 Review:
With no one else to turn to, Navy diver Kelsey Sinclair is forced to reach out to the estranged father of her baby daughter.
Landon Chambers is shocked to find out that he is the father to a darling 9mo old. The last year had been a whirlwind for him, and he is committed to being there for his daughter despite his past mistakes. I admired how far he has come in his journey and his commitment to taking his newfound faith seriously.
Kelsey has been through a lot in the last year and a half, and she is in a tough spot with no one she can call on to help with her daughter while she does she job. Kelsey is a strong woman who loves her daughter dearly, I admired her dedication and protectiveness.
Overall, a heartwarming and inspiring second chance romance with admirable characters who have both been through a lot, fighting for their daughter. I think that this book had a well built backstory, and an adorable baby. I liked the relationship development over the course of the book and the strong themes of faith and forgiveness. An enjoyable read throughout!
I received a complimentary copy of this book. Opinions expressed in this review are completely my own.