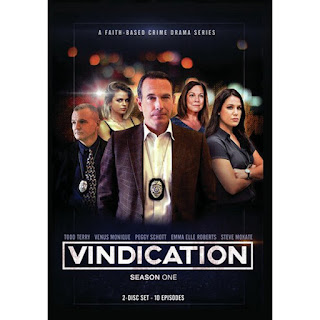 Vindication is a unique crime drama series that alters the perception of faith-based entertainment. Detective Travis (Todd Terry, Breaking Bad) has spent 15 years solving cases in the small town of East Bank, Texas. When the addition of an eager trainee upends his routine, Travis is forced to adjust his ways while balancing a growing number of suspiciously consistent cases. At home, tensions between the cynical detective and his devoutly religious wife escalate when their estranged daughter returns home. http://www.vindicationseries.com/

Review:
Vindication is a unique crime drama, that centers around Detective Travis as he interviews the suspects and witnesses, exploring how it might have happened, and it is up to Detective Travis to discern the truth. The first season introduces the characters and the format of the show, and as the season progresses we get a deeper glimpse into Travis's personal and home life.
The episodes cover a variety of topics, with a different slant than your typical crime shows. I like how it keeps you guessing, because you only have access to the information that Travis does, so the answers aren't clear cut and sometimes he is wrong and has to backtrack.
Each of the episodes is half and hour, and does a great job with though provoking plots, with compelling teachable moments. The show is well done, directed more towards adults and older teens, with a variety of crimes presented realistically without all the explicit details, but in a ways that can be a great conversation starter about tough topics like sexting, emotional affairs, money, marriage, drug addiction, and PTSD. One of my favorite characters is Travis's wife, who is a firm Christian who lives what she believes.
A unique crime drama with family values and teachable moments, definitely worth checking out!
#VindicationMIN
I received a complimentary code to watch this show. Opinions expressed in this review are completely my own.
Vindication is now streaming its second season, new episodes every Wednesday on Pureflix!
Catch up on the first season, then start streaming the second.
Pureflix has an entire catalog of clean family entertainment start your free trial today at https://pureflix.com
Stay tuned for an upcoming giveaway of a Pureflix Subscription package!
Posted by Faith at 9:37 PM