God's Not Dead : We the People // Movie Review 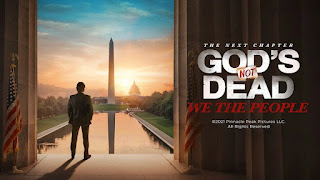 The God’s Not Dead franchise continues in God’s Not Dead: We the People as Reverend Dave (White) is called to defend a group of Christian homeschooling families. He finds himself taken aback by the interference of the government, and believing that their right to educate their own children is a freedom worth fighting for, Reverend Dave is called to Washington DC to testify in a landmark congressional hearing that will determine the future of religious freedom in our country for years to come.
In the words of Ronald Reagan, “Freedom is a fragile thing”. Individual freedoms and liberties are at the center of this passionate and emotional story, and it runs from the heart of the country to the corridors of Washington. Who will decide what a child needs to know for generations to come? Will God be left behind?
A few fun facts:
-Christian singer Francesca Battistelli is one of the lead characters in the film, and she plays a Christian woman who homeschools her children (Bonus fun fact: Francesca homeschools her children in real life!)
-Some of the original God's Not Dead movie characters are back in this film!
-You can learn more about the cast HERE
Go see the movie in theaters October 4th, 5th, and 6th only!
Find Tickets: https://godsnotdead.com/

Review:
As a former homeschool student myself, I remember well watching the court decisions on cases that affected homeschooling rights over the years. So I was intrigued by this 4th installment of the God's Not Dead franchise, that centers around a group of homeschoolers facing persecution for their decision to homeschool for faith-based reasons.
An engaging film that introduces new characters along with familiar faces. I thought that  the film did a decent job of representing homeschooling and the common misconceptions surrounding it, as well as the struggles and fears. Heart-tugging as well as patriotic, I liked the multiple interwoven storylines, and characters.
Overall, an entertaining and engaging family film, excellently acted, and featuring well known faces. A great conversation starter, though it does tend to be the type of film that will mostly appeal to one side of the aisle and knows it. I liked the focus on family, and faith. Perfect for fans of previous movies in the franchise!
#GodsNotDeadMIN #GodsNotDeadWeThePeople
#MomentumInfluencerNetwork
Many thanks to Pinnacle Peak for providing this product/product information for review.  Opinions are 100% my own and NOT influenced by monetary compensation.  I did receive the product in exchange for this review and post.
Posted by Faith at 12:28 AM