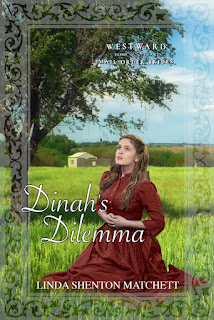 Will she have to run from the past for the rest of her life?

Dinah Simpkins has no chance of making a good marriage. Her outlaw brothers and her father’s gambling addiction have ruined the family’s reputation. Then the Westward Home and Hearts Matrimonial Agency provides an opportunity for a fresh start. After Dinah arrives in Nebraska, she discovers her brothers played a part in the death of her prospective groom’s first wife.

As a former Pinkerton detective Nathan Childs knows when someone is lying. The bride sent by the matrimonial agency may be beautiful, but she’s definitely hiding something, and he has no intention of marrying her until he uncovers the truth. But an easier solution may be to send her packing. Then his young daughter goes missing. He and Dinah must put aside their mutual hurt and mistrust to find her.

Dinah takes her chance at a fresh start away from the reputation that has soiled her family name, she is matched up with former Pinkerton agent and widow, Nathan Childs, who is father to a young daughter, Florence. Can Dinah and Nathan let go of the past in order to embrace the chance of a future together?

A charming mail-order bride romance, I like how Dinah bravely takes things in stride connecting quickly with Florence and working hard to prove that she can be the wife of a farmer. Nathan loves his daughter and has good intentions, but moving on isn't easy and he puts his foot in his mouth more than a few times. I liked that Nathan and Dinah are both Christians, and rely on their faith daily.

Overall this was a quick read, with a sweet plot, an adorable little girl, plenty going on, with strong themes of faith. I especially liked that Nathan has close friends that he could rely on for advice, while getting to know Dinah. I liked seeing their relationship grow over the course of the story. An enjoyable quick read for fans of arranged marriage romance and westerns! 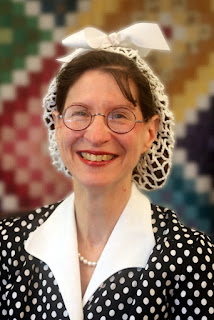 Linda Shenton Matchett writes about ordinary people who did extraordinary things in days gone by. A volunteer docent and archivist for the Wright Museum of WWII, Linda is a former trustee for her local public library. She is a native of Baltimore, Maryland and was born a stone’s throw from Fort McHenry. Linda has lived in historic places all her life, and is now located in central New Hampshire where her favorite activities include exploring historic sites and immersing herself in the imaginary worlds created by other authors.

As a novelist, I write about ordinary people who did extraordinary things in days gone by. And to me, nothing is more extraordinary than leaving all that you know to travel a great distance (often thousands of miles) to marry a man you’ve never met. Don’t you agree?

During the initial settlement of the American West, the population was primarily composed of men. Men who went in search of gold, to seek new opportunities in farming and ranching, or to make a fresh start where land and resources seemed unlimited. Eventually, loneliness set in for those who were single, yet there was a dearth of suitable women to marry.

The conundrum for the men was how to meet and court a woman without leaving for fear of someone taking their land or claims. Some of the bachelors wrote home asking friends and family for referrals to single women who would make a good wife. Courtship would take place via correspondence until the couple decided they were suited to marry. The more common scenario was that of mail-order brides.

Ads were placed by the men in eastern newspapers. They would tell a bit about themselves and what traits they were seeking in a wife. Interested women would reply, and the advertiser would respond to the applicant he thought was a good fit. As with those men who wrote home to find a mate, the process was much the same with courtship occurring through letters.

Most of the time, the marriages went smoothly, with the couple falling in love, resulting in a long and happy relationship. However, there are stories of marriages that did not survive because of abandonment, abuse, death, or the discovery of a still-living spouse. A few incidents are recorded about mail-order brides whose groom paid her railway passage, only for her to marry someone else because he seemed a better prospect. Fortunately, those instances seem to make up a small percentage.

I hope you enjoy Dinah’s Dilemma: A Mail-Order Bride Romance.

Labor Not in Vain, September 15

For Him and My Family, September 18

The Meanderings of a Bookworm, September 25 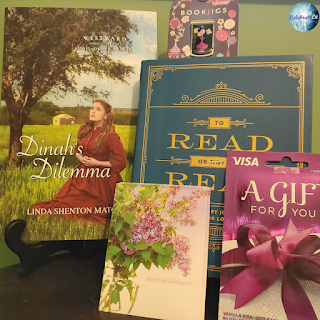 To celebrate her tour, Linda is giving away the grand prize package of a Book Journal, Floral Book Plates, Bookjigs Bookmark, a $25 Visa Gift Card, and an autographed paperback edition of Dinah’s Dilemma!!