The Havest of Grace by Cindy Woodsmall ~ Please rank my review 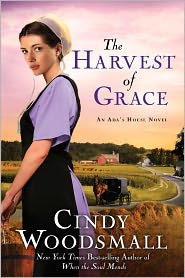 My review: Sylvia Fisher is gifted with a special touch with dairy cattle, so when she makes a horrible mistake with her past love, she flees to another Amish community to work for Michael and Dora Blank.
Their son, Aaron Blank returns home after spending time in rehab, to sell his parents farm and move them to an easier lifestyle in their ole age. But his father doesn't believe he's really changed. And then there is the pretty young woman who tends his parents livestock and for whom his parents have developed an adoptive affection. Will Sylvia and Aaron be able to escape their pasts and move into the future?

I wasn't sure how well I was going to be able to get into this story once I found out that it was the third in a series. So I was really surprised when I picked it up how much I actually got into it! It helped a ton that there was a short synopsis of the last two books in the front of the book so I knew what was going on. I then commenced to read and finish this book in less than one day! The plot quickly drew me into the characters' plights, and my heart instantly went out Sylvia, who was my personal favorite. I found all the characters well written and well rounded though sometimes I was a bit confused over who was who and what their back story was, but that was pretty much due to the fact that I hadn't read the earlier books which had obviously featured these other characters. Even though I was riveted throughout the whole book I found myself looking forward to the scenes with Aaron and Sylvia in them, mostly because I knew their stories better, and thus could relate to them better. (They were the two main characters at center stage).

That being said, I found this to be an overall great book which I would certainly recommend to others. I found the message of forgiveness well presented. I also found this book engaging and not too predictable, plus the plot tied together nicely.

I genuinely enjoyed this book, the characters, and learning more about the Amish. I am planning now planning on reading the first two in the series so I won't be confused! Definitely worth your time especially if you've read the first two, which I'm sure are great! Thanks so much for reading!

Please rank my review below

Thanks so much to Ashley Boyer, Chris Sigfrids and Waterbrook/Multnomah Publishing for giving me this review copy free of charge in exchange for an honest review.
Posted by Faith at 3:33 PM