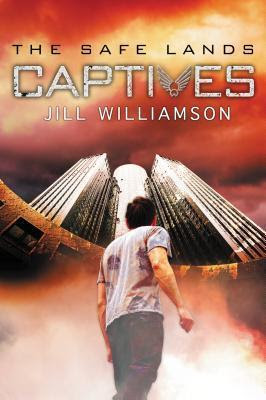 Ms. Williamson has brought to live an entirely new world, with entire orders and codes of its own. I was whisked away to Glenrock and then Safe Lands, I loved the way that she showed in various ways the many contrasts between the two civilizations, in not only landscape, but in way of life, and moral codes.

The story was told from various viewpoints, and usually that isn't my thing, but this time I think that it truly enhanced the story showing the strange new world that they had stepped into from each person's perspective.

I think that my favorite character was Mason, because he was quick-witted, careful, and always thinking not just going along with what was going on and wisely hiding his thoughts.

I really loved the brilliance of this plot, and how it focuses on finding absolute truth in a clouded world.

Overall, this book was an adventure that swept me to a different time and place, and all from the safety of my own home! I'll be honest and tell you right now that I don't want to visit Safe Lands anytime soon! But this book was a well written adventure, and I look forward to seeing how the epic unfolds in future books. You won't want to miss it!

I received this book from the author and the publisher in return for an honest review! Thank you!

Here is the blurb:
One choice could destroy them all.
When eighteen-year-old Levi returned from Denver City with his latest scavenged finds, he never imagined he’d find his village of Glenrock decimated, loved ones killed, and many—including his fiancée, Jem–taken captive. Levi is determined to rescue what remains of his people, even if it means entering the Safe Lands, a walled city that seems anything but safe.
Omar knows he betrayed his brother by sending him away, but helping the enforcers was necessary. Living off the land and clinging to an outdated religion holds his village back. The Safe Land has protected people since the plague decimated the world generations ago … and its rulers have promised power and wealth beyond Omar’s dreams.
Meanwhile, their brother Mason has been granted a position inside the Safe Lands, and may be able to use his captivity to save not only his people, but also find a cure for the virus that threatens everyone inside the Safe Lands.
Can Mason uncover the truth hidden behind the Safe Land’s façade before it’s too late?

Author bio:
Jill Williamson is an author of all things weird. She grew up in Alaska with no electricity, an outhouse, and a lot of mosquitoes. Her Blood of Kings trilogy won two Christy Awards, and she recently released Captives, a dystopian teen novel from Zonderkidz. Jill lives in Oregon with her husband and two children and a whole lot of deer.

And a Finley & Flynn newscast!
You can purchase the book at any of the online retailers linked below or at your favorite Christian book store!
Amazon Paperback Book Page: http://www.amazon.com/dp/0310724228/ref=as_li_ss_til?tag=wwwteenageaut-20&camp=0&creative=0&linkCode=as4&creativeASIN=0310724228&adid=02BF3WZ0EAK4MFFP28QA

Here's your chance to enter to win a copy of Captives by Jill Williamson!

Use the rafflecopter to enter. US residents only please!

a Rafflecopter giveaway
Posted by Faith at 1:46 PM