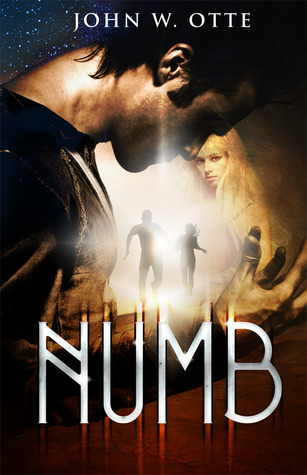 
Crusader is numb. He does not feel emotions or pain. He is a feared assassin for the Ministrix, killing "heretics" who are untrue to the True Church. When he is given the mission on killing a young woman named Isolda he finds himself in dangerous waters, struck by feelings he didn't know he was capable of. Crusader and Isolda find themselves working together, on the run from the very administration that he had pledge himself to.

In a futuristic world, where the human race is living in space, Mr. Otte spins his suspenseful and thought provoking adventure. I had previously heard many of my friend raving about Mr. Otte's Failstate, so I just knew I had to give Numb a try. I had no idea what to expect, but I was blown away by the detail and intricacies in the world of Isolda and Crusader.

Numb plunged me into a dangerous new civilization, and from the very beginning I was hooked. It did take me a while to get a good grip on my surroundings, and understand the government and so on, but that didn't slow me down.

This might just be me, but I thought there were strong similarities in this story to the early Catholic church, and how they had a strong voice in political matters, and how they would have people they believed to be heretics killed.

Overall, this was a great read, full of action and fast-paced adventure, very different from what I normally read. But I enjoyed it immensely, and would happily recommend it to people who love a wholesome, yet high stakes adventure.