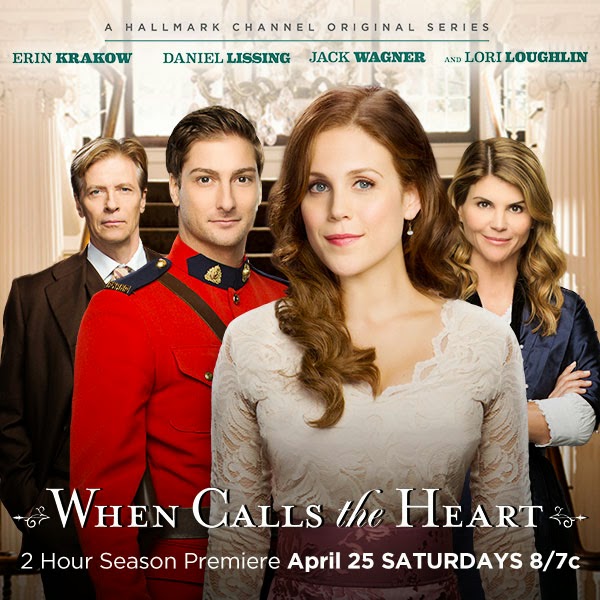 When my daughter told me that she had received confirmation of being on this lovely tour, I was thrilled! Last year When Calls the Heart became my favorite TV Show currently airing, I fell in love with town, and all of its wonderful inhabitants, so when I found out that I had the unique opportunity to see the first episodes of season 2 before it aired you can imagine how excited I was.

When Calls the Heart is the hit series that aired last year on the Hallmark Channel created based off of books originally written by Janette Oke, and put onto the small screen by Michael Landon Jr.

Season 2 picks up right where season one left off, with many returning faces, along with some new ones as well. I love that Abigail is back, as the voice of reason and encouragement of Coal Valley, yet her story has some new plot twists on their way.

Elizabeth is called home when her mother falls ill, and finds herself caught between two worlds. The one she came from and the frontier life she has come to love. And her parent's may just have a few tricks up their sleeves.

This is a terrific series, that celebrates faith, family, and community. I love every single one of the stories not just those of the main characters, but also of the side characters, they could probably make a spinoff series, and I would be just as invested in that too! From what I've seen of the second season, it is sure to be a good one! So if you haven't seen this show, I strongly recommend you give it a try, it's not often you find such a well made show that incorporates wholesome values into quality entertainment!

The series is inspired by Janette Oke’s bestselling book series about the Canadian West. “When Calls the Heart” tells the captivating story of Elizabeth Thatcher (Erin Krakow), a young teacher accustomed to her high society life, who receives her first classroom assignment in Coal Valley, a small coalmining town where life is simple, but often fraught with challenges. Lori Loughlin plays Abigail Stanton, a wife and mother whose husband, the foreman of the mine, along with a dozen other miners, has just been killed in an explosion. The newly widowed women find their faith is tested when they must go to work in the mines to keep a roof over their heads. Elizabeth charms most everyone in Coal Valley, except Constable Jack Thornton (Daniel Lissing) who believes Thatcher’s wealthy father has doomed the lawman’s career by insisting he be assigned in town to protect the shipping magnate’s daughter. Living in a turn of the century coal town, Elizabeth will have to learn the ways of the frontier if she wishes to thrive in the rural west on her own.

Now for the very special giveaway. If you are dying to see When Calls the Heart Season 1, then here's your chance! Right here on this blog, I've been privileged to be able to host a giveaway for the DVD set of the entire first season!

The following rules apply:
Open to US residents only please. 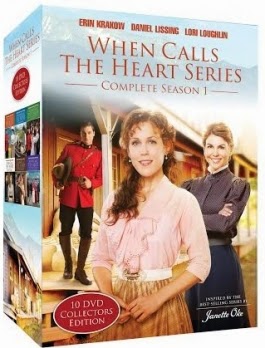 "Disclosure (in accordance with the FTC’s 16 CFR, Part 255: “Guides Concerning the Use of Endorsements and Testimonials in Advertising”): Many thanks to Propeller Consulting, LLC for providing this prize for the giveaway. Choice of winners and opinions are 100% my own and NOT influenced by monetary compensation. I did receive a sample of the product in exchange for this review and post.
Only one entrant per mailing address, per giveaway.  If you have won a prize from our sponsor Propeller / FlyBy Promotions in the last 30 days, you are not eligible to win.  Or if you have won the same prize on another blog, you are not eligible to win it again. Winner is subject to eligibility verification.”

a Rafflecopter giveaway
Posted by Faith at 12:00 AM