The Wood's Edge by Lori Benton ~ Review and CFBA Tour 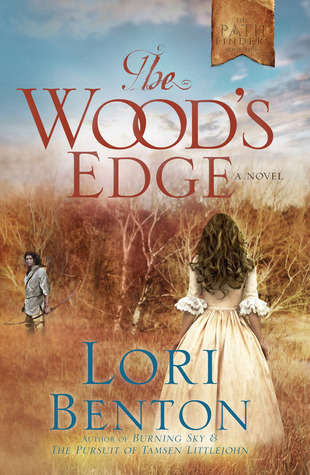 Set in 1757 where Oneida Indians and British Colonists live side by side, two families are changed forever. After the fall of Fort William Henry, Major Reginald Aubrey 's wife gives birth to a son, but later that day their son dies in her arms while she is asleep. The Major is beside himself with grief and struggles to find the words to tell her the awful truth, but then he sees a rescued captive who has given birth to twin boys, one white and one dark in appearance. He sneaks in a replaces one of her sons with his own dead one and takes the live boy to his wife, who never knows the difference, they name him William. When Major Aubrey and his wife try to to leave, they are attacked by the Indians, the Major sees a family attacked and rushes to their aid but is only able to save the baby girl, that he takes into his own family, and calls Anna.

The mother of the twins, Good Voice, realizes the the crime immediately, but there is little she can do but go back to her life with the Oneida and her husband. The two boys are raised to follow different paths, one raised to the family he was born, and the other with the Major and his family. As they grow, their lives separate and became entwined again through the people in their lives that love them.

This book covers a lot of ground, and spans decades, giving glimpses and snapshots into the lives of the two boys as they grow, and their families and how that one choice by Major Aubrey changed all of their lives forever. I'll admit that this is a hard book to describe, because it covers so much ground and so much happens in the decades that follow. Rich in history, that highlights the cultural differences and the people that laid the foundation for a young America and the struggles they faced.

Not only does this book follow the two boys, but also their parents, and family friends. In this way I was able to view this story in a sort of panoramic view, through the eyes of so many of the characters. I loved how the many characters brought this epic historical to life, and I'm excited to see what will happen next!

From beginning to end I was riveted by Ms. Benton's fantastic storytelling and the rich history, not an easy book to put down!

Lori Benton spent her late teens and early twenties pursuing a career as a wildlife artist, attending the Maryland College of Art & Design before she began painting professionally. When not writing or researching, Lori can be found exploring the mountains of southern Oregon with her husband, Brian. Lori's first novel, Burning Sky was nominated as an ECPA 2014 Christian Book Award Finalist and also received double nominations for 2014 Christy Awards. The Pursuit of Tamsen Littlejohn is her second novel. 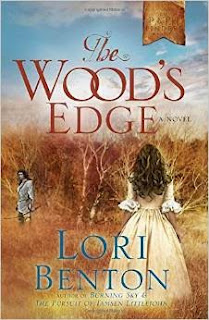 At the wood’s edge cultures collide. Can two families survive the impact?

The 1757 New York frontier is home to the Oneida tribe and to British colonists, yet their feet rarely walk the same paths.

On the day Fort William Henry falls, Major Reginald Aubrey is beside himself with grief. His son, born that day, has died in the arms of his sleeping wife. When Reginald comes across an Oneida mother with newborn twins, one white, one brown, he makes a choice that will haunt the lives of all involved. He steals the white baby and leaves his own child behind. Reginald’s wife and foundling daughter, Anna, never suspect the truth about the boy they call William, but Reginald is wracked by regret that only intensifies with time, as his secret spreads its devastating ripples.

When the long buried truth comes to light, can an unlikely friendship forged at the wood’s edge provide a way forward? For a father tormented by fear of judgment, another by lust for vengeance. For a mother still grieving her lost child. For a brother who feels his twin’s absence, another unaware of his twin’s existence. And for Anna, who loves them both—Two Hawks, the mysterious Oneida boy she meets in secret, and William, her brother. As paths long divided collide, how will God direct the feet of those who follow Him?

If you would like to read the first chapter of The Wood's Edge, go HERE.