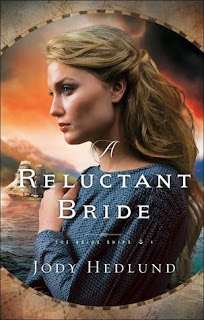 Mercy Wilkins is an Angel of Mercy on the streets of London, seeing only a bleak future ahead of her if she stays she heeds her sister's urging and joins the bride ship headed for British Columbia.

Dr. Joseph Coville is titled and wealthy, a sought after match for many looking to secure a husband for their accomplished daughter. Joseph has encountered much loss in his life, and is caught between running away and his calling to make a difference in the lives of those without access to care. He signs on with the bride ship, and is struck early on by Mercy's selfless care for others, her compassion and beauty.

Mercy is determined not to marry, but is it possible that God has other plans?

The very first in a brand new series by Jody Hedlund, this book explores the situations and hopes for a fresh start that made women choose to take a chance on a new life. I was surprised by how much of this was inspired by a true story. Ms. Hedlund highlights the differences in class that held poor women back in London, and the opportunities awaiting them in a new home.

Mercy is compassionate and selfless, automatically taking on a mother-like role for the younger girls on the ship, caring for them through every storm. While she is fearless when championing others, she struggles to see value in what she herself has to offer. Her natural nursing skills lead her to assisting Dr. Coville as he tends the sick during their long, rough journey. I admired her love for others, she is humble to a fault at times, with a courage that not even she knows.

Joseph feels pulled in many directions, he feels called to help the less fortunate, yet has a passion for seeing the world. He is inspired by Mercy's selflessness and unassuming nature never expecting something in return, unlike his peers in society. As he gets to know Mercy, he begins get just a taste of her experiences, realizing that maybe he isn't as blind to class as he thought that he was. I think all of us can see a bit of ourselves in Joseph, everyday I myself have my eyes opened to the realities of this world through relationships with and the experiences of others.

Strong tension throughout, whether from chemistry between the characters or through through situations. I was inspired by the bravery of these women headed to a place they had never been in hopes of a bright future where they could be anything. Ms. Hedlund does an excellent job of  realistically showing the binds of class, and how it was so big a part of life for many in the 1800s dictating marriage, opportunity, etc. I loved Mrs. Moresby and how she represented the opportunities ahead for the women in British Columbia. Miss Lawrence is a kind and silent ally, an I am excited to read her story in the near future. A strong start to a new series, great character development and interaction. You won't want to put it down!

I received a complimentary copy of this book. Opinions expressed in this review are completely my own.
Posted by Faith at 4:47 PM