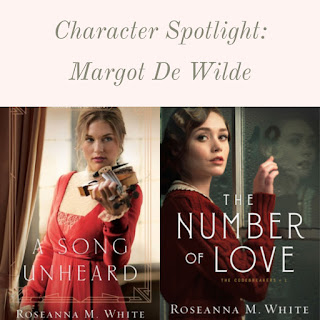 Margot De Wilde is brilliant with numbers, they are a way for her to explain and understand the world around her, she thinks, learns, and prays in numbers. Her father recognized her gift early on and encouraged her talent by leaving increasingly challenging puzzles for her to solve. She applies algorithms to her everyday live, cleverly helping her brother with codes of her own, as well as outsmarting the Germans.

Margot is resourceful and courageous, with an intelligence and maturity beyond her years. She doesn't have the most patience with the activities of the average young woman her age, but because of the spies who are looking for the secret to her father's codebreaking success.

Margot shares a strong bond with each of her family members, but most of all she was close to her late father. Her mother and brother love her dearly, accepting her as she is, and protecting her.

Margot was one of my very favorite character from A Song Unheard and I was absolutely thrilled when I heard about Mrs. White's brand new Codebreakers Series and that the first book The Number of Love is about Margot.

Welcome to the Blog Tour & Giveaway for The Number of Love by Roseanna M. White with JustRead Publicity Tours! Follow along with the tour for a special inside peek at how The Number of Love is connected to the author's previous book from another series, A Song Unheard.

Three years into the Great War, England’s greatest asset is their intelligence network—field agents risking their lives to gather information, and codebreakers able to crack every German telegram. Margot De Wilde thrives in the environment of the secretive Room 40, where she spends her days deciphering intercepted messages. But when her world is turned upside down by an unexpected loss, for the first time in her life numbers aren’t enough.

Drake Elton returns wounded from the field, followed by an enemy that just won’t give up. He’s smitten quickly by the too-intelligent Margot, but how to convince a girl who lives entirely in her mind that sometimes life’s answers lie in the heart?

Amidst biological warfare, encrypted letters, and a German spy who wants to destroy not just them, but others they love, Margot and Drake will have to work together to save them all from the very secrets that brought them together.

Willa Forsythe is both a violin prodigy and top-notch thief, which make her the perfect choice for a crucial task at the outset of World War I—to steal a cypher from a famous violinist currently in Wales.

Lukas De Wilde has enjoyed the life of fame he's won—until now, when being recognized nearly gets him killed. Everyone wants the key to his father's work as a cryptologist. And Lukas fears that his mother and sister, who have vanished in the wake of the German invasion of Belgium, will pay the price. The only light he finds is in meeting the intriguing Willa Forsythe.

But danger presses in from every side, and Willa knows what Lukas doesn't—that she must betray him and find that cypher, or her own family will pay the price as surely as his has.

Roseanna M. White is a bestselling, Christy Award nominated author who has long claimed that words are the air she breathes. When not writing fiction, she's homeschooling her two kids, editing, designing book covers, and pretending her house will clean itself. Roseanna is the author of a slew of historical novels that span several continents and thousands of years. Spies and war and mayhem always seem to find their way into her books...to offset her real life, which is blessedly ordinary.

Grand Prize: Shadows Over England series, The Number of Love, and the Decrypto board game, plus "Mi Alma" necklace (Necklace is 24" chain with a 1" pendant that says "Mi Alma" Spanish for "My Soul". A term of endearment used throughout the book. Handmade by Bookworm Mama)

(3) additional winners of The Number of Love.

Enter via the Rafflecopter giveaway below. Giveaway will begin at midnight June 3, 2019 and last through 11:59 pm June 17, 2019. US only. Winners will be notified within 2 weeks of close of the giveaway and given 48 hours to respond or a new winner will be chosen.
Giveaway is subject to the policies found here.