A Distance Too Grand by Regina Scott ~ Review 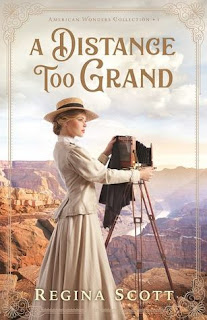 A riveting adventure of romance, sabotage, and forgiveness, set against the breathtaking wonder of the Grand Canyon.

Meg Pero grew up assisting her photographer father, and after his death she is determined to fulfill his contract with the Army as part of the surveying team mapping the North Rim of the Grand Canyon. But the man leading the expedition is none other than her ex-fiance, Capt. Ben Coleridge.

Meg grew up on the road, following her father wherever his job took him, now that he's gone she's fighting to blaze a trail for herself as a photographer. She is a strong heroine, who must stand up for herself in a world of men, and an uncertain future. Meg is smart, and spunky, willing to do what it takes to prove her mettle as a photographer worthy of her position.

I loved the friendship and camaraderie among the surveying crew, which adds to the tension of who could be behind the mysterious events plaguing their crew. Meg finds a fast friend in Dot, the wife of the cartographer, who also cooks and serves as a chaperone. Dot has a strong faith, that encourages Meg and others on their journey.

Overall, a highly entertaining read with well developed characters who grow over the course of the book as they deal with sabotage, betrayal, and a second chance at love. I liked Ben's strong faith and how he finds ways to reconnect with Meg on their journey. There is a lot going on, with compelling characters, and a lot going on that kept me guessing where the story would go next. I also enjoyed learning about the Grand Canyon during the discovery/mapping phase, before it became a National Park. Very well-written read.

I received a complimentary copy of this book. Opinions expressed in this review are completely my own.
Posted by Faith at 1:31 PM