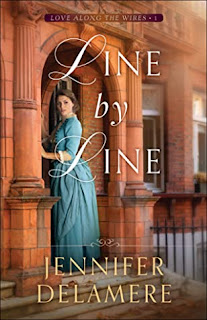 Career driven and independant, Alice and Douglas find a kindred spirit when they cross paths, but could there be more than their well laid plans?

Alice is telegraph operator, confirmed spinster, with modern sensibilities. She is determined to make her own way in the world, without a man. I admired her self sufficiency and how she took initiative to pursue a career, she is very intelligent and a modern woman for her time.

While Douglas is very career driven and focused on attaining the next goal to take him one step further away from the poverty that marked his youth. Douglas and Alice are very set on their current trajectories, but as they get to know each other they find themselves questioning what they thought they wanted.

Slow to start, it took awhile for me to warm to this book, but it picked up speed as it moved along. Douglas and Alice are very set on their paths and stubborn, but I loved how this story shows how sometimes there are better things than what we plan for ourselves. There were great moments that were bright spots in this book, but I wish that more of their moments together had been captured as I think that it would have added depth to their friendship as it grew. A romance about being surprised by love.

I received a complimentary copy of this book. Opinions expressed in this review are completely my own.
Posted by Faith at 12:00 AM