A Bride for Noah by Lori Copeland and Virginia Smith ~ Review 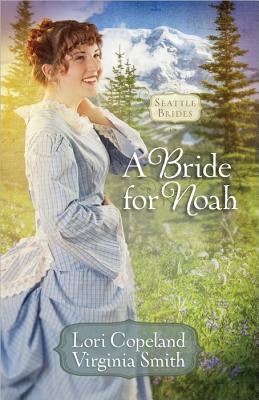 Noah writes a letter to his aunt and uncle as a joke, telling them to send a wagon load of women west, his aunt is naturally mortified, but his uncle takes him seriously. His first recruit is Evie, their former housemaid.
Evie is shocked by the idea, but when she realizes that she doesn't love her fiancé and that he doesn't love her in return, she decides to take a chance on a fresh start.
When Evie and the other women arrive, Noah is dumbfounded, he never expected his uncle to take him seriously, and now the lumber camp is swarming with women!

I was fascinated by the fact that this novel is the fictitious account of a real life event, and there was a lot of history incorporated into the story. The setting is realistic and truly gives a sense of what it must have been like to have been among the first settlers in a new area.

My favorite historical character was Chief Seattle, the authors did a great job of portraying his as a wise, at times humorous, man of faith.

This books has a full cast of characters many of whom are at differing stages of their relationships. It was fun getting to know them all. Noah's Uncle Miles was a huge part of the story and was something of a big dreamer and schemer.

Overall, this was an interesting read based on historical facts and events, I loved how the people of Seattle had a vision for their town to be a place free of liquor and other vices. Thought the pace was a bit slow at times I appreciated the research that went into it, to tell this tale of the birth of Seattle.

Disclosure Material Connection: I received one or more of the products or services mentioned above for free in the hope that I would mention it on my blog. Regardless, I only recommend products or services I use personally and believe will be good for my readers. I am disclosing this in accordance with the Federal Trade Commission's 16 CFR, Part 255: "Guides Concerning the Use of Endorsements and testimonials in Advertising."
Posted by Faith at 8:00 AM