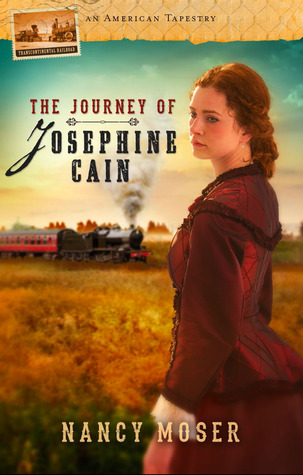 After the war, all Josephine wants if for everything to go back to the way it was, with parties, dresses, and maybe a beau. But her mother is still mourning the loss of her son, and her father has buried himself in his work that takes him west to oversee the railroad. Josephine decides to travel west to be with her father, but when she meet Lewis Simmons she decides to stay.
But Lewis may not be all that he appears to be, with a shady past and motives that are not entirely pure, as he takes the job of escorting Josephine and her cousin Freida on the historic train ride west to celebrate the railroad meeting the 100th meridian.
Along the way she meets Hudson, a young man who fought with her father in the war,  and as distance takes them away from each other, the train brings them back together.
Who will she ultimately choose?

This is a well researched historical novel, not so much about the romance, but about Josephine personally as she grows as a woman and in her faith.

There were many colorful side characters that enriched the story, one of my favorite was a little girl named Nelly, which also opens the door for Josephine to get to know Hudson better as he becomes their escort back to Washington.

I would not suggest this book to younger readers as there are some graphic details, that accurately portray the darker side of the west, as well as delving into the bad guy's head which is not something that I liked, and for me personally it slowed down the pace of the story.

My favorite character was Hudson, because of his enthusiasm about his job and how he wanted a future different fro his past and went after it. He had a sharp sense of humor and a way with words.

This would be a terrific book for fans of post-civil war fiction, because it is full of history and tells the story of a nation beginning to heal after war.

About the book: When a socialite from the nation's capital embarks on a journey to the Wild West, her life is changed forever.

A setting populated by hundreds of laborers, outlaws, and Indians is hardly the place for a wealthy general's daughter. But Josephine Cain is determined to visit her father, who supervises the day-to-day work involved in the grandest ambition of post-Civil War America: the building of the Transcontinental Railroad. Life with the railroad is far from the proper life Josephine is used to, and she faces deadly gunfights, harsh weather, and vigilante uprisings. She is torn between the West and the East; between her privileged upbringing and the challenges of a new frontier; between the pull of the suitable beau her parents approve of and an attraction to a rough but charming Irish railroad worker. But if Josephine is willing, she just might find a new life, a unique purpose . . . and true love.

Meet Nancy: Nancy Moser is the best-selling author of more than twenty novels. She is a winner and two-time nominee of the Christy Award, and her latest novel was named to Booklist's "Top 10 Romance Novels of 2011." Nancy and her husband have three grown children and three grandchildren, and they live in the Midwest.

Learn more at Nancy at: http://nancymoser.com/.

Check out all of the other great stops on this tour: http://litfusegroup.com/author/nmoser
The Journey of Josephine Cain by Nancy Moser follows the adventures of a D.C. socialite as she gets involved with the building of the Transcontinental Railroad right after the Civil War. Be sure to check out Nancy's fun Pinterest board for the book!

Five winners will receive:
Enter today by clicking one of the icons below. But hurry, the giveaway ends on October 26th. All winners will be announced October 28th at the Litfuse blog.

Don't miss a moment of the fun; enter today and be sure to visit the Litfuse blog on the 28th to see if you won one of the books!