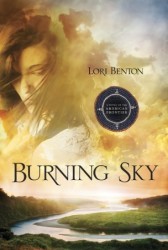 Lucie's Review:
This book grabbed me from the very first page, and didn't let go until the very last page was turned down, with its wide spectrum of characters, each with their own story and secret. I was riveted to the page, and I just wanted to keep reading to find out what would happen next, yet at the same time I didn't want it to end.

Willa was a strong practical heroine, that you can help but immediately admire. She had been through so much already, that I was hard to see her go through much more, and all I wanted was for her to have the happiest ending imaginable. Willa had such an inner strength about her, she did what she had to do, even if it meant risking it all.

Willa is a young woman who walks in two worlds, even though she was taken captive against her will by the Indians so many years ago,  her people still treat her with rudeness and suspicion. The one ray of light was Willa's friend Anni who is a loyal friend who supports Willa even when she doesn't understand her choices.

Willa finds Neil MacGregor hurt and unconscious in the woods, so she takes him to her parent's place only to find it abandoned. Neil has his own past to hide, but he has a great sense of humor and strong faith.

Joseph Tames-His-Horse has love Willa ever since the Indians took her and named her Burning Sky, but she was adopted into his clan so that he could never be more than a brother to her, but even so he follows her to her parents house in hopes of convincing her to come back to the People. Joseph is a strong man, with a sincere faith in Christ, who seeks to do God's will even when it is at war with his own.

Richard Waring wanted to marry Willa, before she was taken, and after she was stolen he searched high and low for months. But he also has his eye on her parent's land. Willa's parents are mysteriously missing, and it is assumed by everyone that they were Tories and the state is going to auction off the land, unless Willa can prove other wise.

There were so many fantastic characters. 2 of my favorites are Matthew and Maggie, who are young "half-breed" children who Willa takes in.

This book has it all, it all drama, intrigue, great dialogue, and compelling characters, with a fresh plot that had me glued to the pages. One of my favorite thing was how well the author seamlessly added Indian and Scottish words without losing the meaning of what they were saying or explaining everything. This is a tale of hope, healing, and second chances. This book is definitely going into my list of top ten reads this year, I highly recommend it!