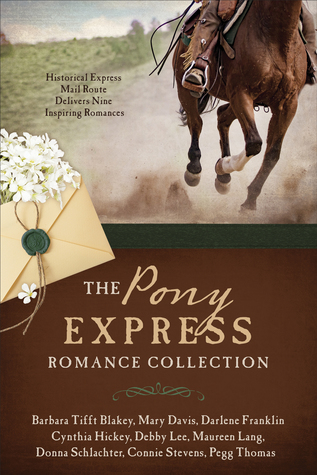 
A common thread of fast horses and skilled riders brings these couples together in this fast paced western collection.

A Place to Belong--Jacob is a man of faith who feels God calling him to be a missionary, but in the meantime he is working at a Pony Express station waiting for God's direction. He's also waiting for the stationmaster's niece, Abby to notice him. I liked how he took the time to get to know her and find ways to make her life better.

Unlikely Hero -- Fox is an express rider who saves Beth Ann's sister from being run over by a horse. Beth Ann overlooks him at first, but realizes that perhaps love can be found in second glances.

The Gambler's Daughter-- Mrs. Gibbs brings Christmas to the Pony Express Station when she learns that Caroline was left there by the stagecoach. Caroline is looking for her father, but finds Martin running the station, and Mrs. Gibbs saves her from an embarrassing situation.

Her Lonely Heart-- Sadie is a strong woman who runs a station by herself, she is surprised when a city doctor named, Luke comes looking for his little brother. He stays on and help her run the station, but she knows that it's a matter of time before he moves on. I really liked Eagle, who comes and helps when there trouble at the station.

My Dear Adora-- Chip Nolan is looking for Adora because of a letter that was stolen when his little brother, who is an express rider, was attacked. After reading the letter, Chips knows that he must find her. He is brave and when he figures out what is going on, he helps her find a safe way home.

Ride into My Heart-- Cynthia is a reporter doing a story on the Pony Express, and befriends Kimi and Gabe. She helps Kimi deal with her sister's death, and talks to her about her faith.

Echos of the Heart-- Catherine stays on despite Benjamin insisting that he never placed an add for a mail-order-bride. She does her best to live her new faith, cooking and cleaning, teaching the riders to read, but's not easy when Benjamin makes it clear that he wants her to leave.

Abundance of the Heart-- Mercy and her brothers train horses for the Pony Express, when she discovers many injured horses at the Cold Springs Station she decides to stay on there and help them. The stationmaster, Fletcher, isn't pleased about the idea. They get off on the wrong foot, but will Fletcher be able to prove that he's not such a bad guy.

Embattled Hearts-- Alannah and her brother find a safe haven at Stewart's Pony Express Station. Stewart agrees to help them out, and Alannah dons male attire to pose as Stewart's assistant. As they get to know one another their friendship grows into something more.

Disclosure of Material Connection: I received one or more of the products or services mentioned above for free in the hope that I would mention it on my blog. Regardless, I only recommend products or services I use personally and believe will be good for my readers. I am disclosing this in accordance with the Federal Trade Commission's 16 CFR, Part 255: "Guides Concerning the Use of Endorsements and testimonials in Advertising."
Posted by Faith at 12:32 AM