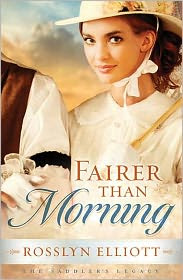 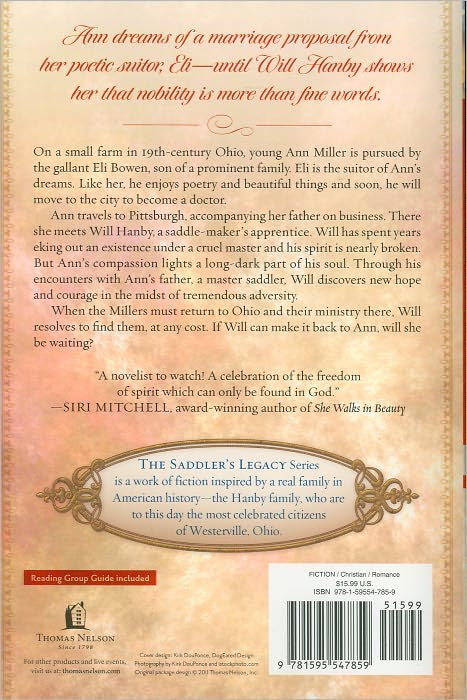 About the Book: Ann dreams of a marriage proposal from her poetic suitor, Eli-until Will Hanby shows her that nobility is more than fine words.

On a small farm in 19th-century Ohio,young Ann Miller is pursued by the gallant Eli Bowen, son of a prominent family. Eli is the suitor of Ann's dreams. Like her, he enjoys poetry and beautiful things and soon, he will move to the city to become a doctor.

Ann travels to Pittsburgh,accompanying her father on business. There she meets Will Hanby, a saddle-maker's apprentice. Will has spent years eking out an existence under a cruel master and his spirit is nearly broken. But Ann's compassion lights along-dark part of his soul.
Through his encounters with Ann's father, a master saddler, Will discovers new hope and courage in the midst of tremendous adversity.
When the Millers must return to Ohio and their ministry there, Will resolves to find them, at any cost. If Will canmake it back to Ann, will she be waiting?

About the Author
Rosslyn Elliott grew up in a military family and relocatedso often that she attended nine schools before her high school graduation. Withthe help of excellent teachers, she qualified to attend Yale University,where she earned a BA in English and Theater. She worked in business and as a schoolteacher before returning to study at Emory University,where she earned a Ph.D. in English in 2006. Her study of American literature and history inspired her to pursue her lifelong dream of writing fiction. She lives in the Southwest, where she homeschools her daughter and teaches in children's ministry.

My review: Fairer than Morning is a rare book, eloquently written, that effortlessly takes you back to another time and place. Reading this book was an absolute pleasure! It was written in such a way that all I wanted to do was sit back and soak in every word, not rushing through to find out what happens on the next page, but simply enjoying the one I was on. And that my friends, is rare.

What I really enjoyed about this book was that it was based on a true story and true events, though some parts were added for a book better suited to fiction. It is not often that I find a book that I can just sit back and enjoy the gentle rhythm of without losing interest, but this book was  magnetic!

The characters were well rounded and engaging. My favorite character was Will, because he wasn't the perfect Prince Charming hero. He had weaknesses, and they made him a better character. His faith and determination to do what was right, even though no one would have blamed him if he had not, was inspiring.

I will admit that it was a bit slow starting for this book, but by chapter five I was totally enchanted.

Overall, I really enjoyed this book and I recommend this book highly! I cannot say how much I enjoyed it. This is not a book that you will want to miss. And I really hope you don't, because this is a book well worth reading! I will most definitely be reading the next book in the series, Sweeter than Birdsong. Thanks :)

To celebrate the release of her debut novel, Fairer Than Morning

, Rosslyn Elliott is giving
away two fabulous prize packages. The first is brand new KINDLE in her
Fairer Than Morning Kindle Giveaway. Then on September 20th she's giving
away a $200 gift certificate toward a Custom-Made Historical Reproduction Dress
(from Recollections) during the Fairer Than Morning Book
Club Chat Party on Facebook! Sigh...romantic.

Be sure to join the fun and enter the Kindle contest -

One winner will receive:

* Fairer Than Morning (for Kindle)

To enter just click one of the icons below. But, hurry, giveaway ends
on 9/19. Winner will be announced on 9/20 at Rosslyn's Book Club Facebook
Party. Details and official rules can be found when entering the contest.

Then be sure to RSVP for Rosslyn's Facebook Party! During the party Rosslyn
will be chatting with guests, hosting a book chat about Fairer Than Morning (don't worry if you haven't read the book yet - you could win a copy!) &
historical Fiction, testing your trivia skills. She'll also be giving away that $200 gift
certificate toward a FABULOUS custom-made period dress from Recollections!

Thanks so much to Amy Lathrop, Litfuse Publicity and Rosslyn Elliot for providing me with a review copy free of charge.
Posted by Faith at 8:48 AM