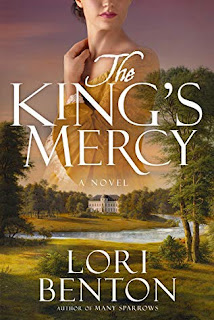 Alex MacKinnon is a Scottish rebel granted the king's mercy exiled and indentured to Captain Edmund Carey to serve as a blacksmith. Alex is drawn to Severn Plantation's conflicts as well as its mistress, Joanna Carey. As his life becomes entangled with the Careys he finds himself stuck between loyalty and freedom.

Joanna took on the running of Severn after the death of her mother when she was twelve years old. A duty that weighs heavy on her shoulders, as many aspects of it conflict with her beliefs.

As Severn's losses increase, Alex finds himself framed for crime he did not commit, will he have to choose between saving himself or the woman he has come to love?

King's Mercy is nothing short of an epic, set in colonial North Carolina. A story of family, friendship, love, loss, betrayal, and the faith that binds people together, as well as a re-telling of sort of the book of Philemon and Paul's letter in regard to Onesimus.

Joanna had to grow up quickly after the death of her mother, she is a kind and humble mistress, caring for those under her charge with her own hands. Her father desires her to marry his protégé Phineas Reeves, in order to ensure the future of Severn. Joanna wants to live out her faith, and hates the divide that slavery puts between her and those under her care.

Alex is a born leader, a man with words to inspire many, exiled to North Carolina he is sold to the Careys under an indenture. Alex is drawn to the capable Joanna, and admires how she humbly care for those around her, and finds her a kindred spirit, wishing for freedom and simpler life. he is mentored by Elijah Moon, the previous blacksmith, who was severely burned and lost his arm in a terrible accident, one of many that have mysteriously been plaguing Severn.

I loved the complexity of the characters, especially Elijah who has lost so much, and is struggling to come to terms with what it means for his future. The characters are vulnerable, and raw at times, and very well crafted. Jemma is a spunky, stubborn young woman, who knows how to stand up for herself. Reverend Pauling is very much like the biblical Paul, wise and steeped in the Scriptures, with good insight with a magnetic humility about him that draws many to the Gospel.

Overall, a completely engrossing read, with great tension throughout. Lori Benton just get's better and better with each book, because now King's Mercy  is my new favorite by her. Heartfelt, compelling, laced with heartache and betrayal, strong faith, and rich history. The whole time I was reading, I couldn't help thinking what a great TV mini-series this book would make! Rugged and filled with drama, this is a book that you won't soon forget!

I received a complimentary copy of this book. Opinions expressed in this review are completely my own.
Posted by Faith at 1:15 PM