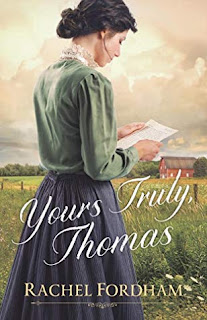 Penny Ercanbeck has been opening and reading other people's letter as part of her job in Washington D.C. at the dead letter office. One day she comes across a letter addressed to a woman named Clara, from a man called Thomas in Azure Springs. She is intrigued by their tragic romance, and with each letter her interest grows, and she goes in search of the mysterious Clara, following her conclusions to Azure Springs and Thomas.

Thomas began writing to Clara after a tragic accident as a means of coping, the last thing he was expecting was a reply.

The story follows both Penny and Thomas as their paths grow ever closer to each other. Penny has many huge decisions in her future, she is a determined and compassionate person, her heart instantly goes out to the author of the letters to Clara. She is very clever and enjoys piecing together the clues in order to solve the mysteries that her job brings.

Thomas was originally a businessman, but since ending up in Azure Springs he realizes that he enjoys working with his hands on the land. He is trying to come to terms with the tragedy that made him start writing the letters to Clara. He makes many friends in Azure Springs, who encourage this step in a different direction.

Overall, a well paced plot with a lot going on and multiple characters, I really enjoyed returning to Azure Springs and seeing many familiar face, even though it is not strictly a sequel--more like a stand alone companion. Good interaction, and it really surprised me how much I liked it since, it did end up taking while for Thomas and Penny to meet in person. An enjoyable read, with great characters, and personal growth from Penny and Thomas.

I received a complimentary copy of this book. Opinions expressed in this review are completely my own.
Posted by Faith at 6:19 PM