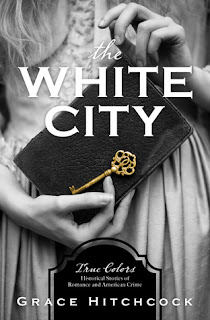 Chicago, 1893. The city is bustling with activity with the coming of the World's Fair.

Winnifred Wylde sees something suspicious while on an outing with one of the suitors that her aunt set her up with, her father who is the precinct inspector, brushes it off, but sends one of his officers to follow her home just in case. Winnie knows what she saw, and is determined to follow her hunch.

Young women are going missing all over town. With the help of  Jude Thorpe, one her father's officers, Winnie goes undercover, taking a job working for Henry Holmes.

Will she be able to expose Holmes's dirty dealings before it's too late?

Winnie is a daring heroine, who stumbles into a case bigger and more terrifying than she could have ever imagined. Her father and aunt have high hopes for her to marry well, and her father has forbidden her from marrying a man on the force.

Slow to start at first, I was drawn to this book because of my interest in the Henry Holmes murders, and it did take time for small things to be uncovered and start to make sense. Part of the reason that it seemed slower to me was because I had some foreknowledge about Henry Holmes and kinda knew what she would be walking into. Her father is a good man, and loves his daughter, he wants the best for her.

Overall, an enjoyable read, though perhaps it would be best enjoyed by someone with less knowledge about the true story, mainly because I just didn't like knowing what she was walking into. Well written with good solid characters.

I received a complimentary copy of this book. Opinions expressed in this review are completely my own.
Posted by Faith at 10:28 PM