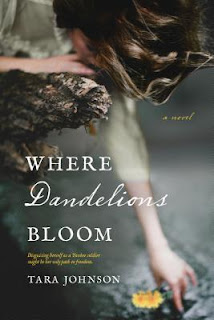 Cassie Kendrick takes her life into her own hands, escaping and arranged marriage and her abusive, alcoholic father, by dressing as a man, taking the name Thomas Turner and joining the Union Army. But her disguise becomes more difficult when she meets the handsome photographer, Gabe.

Photographer Gabriel Avery, is anxious to make his mark on the world by documenting the war, under the mentorship of Matthew Brady. Raised in the city, he is unprepared for life on the frontlines. He befriends many of the men, including the quiet, dry humored, Thomas.

Cassie and Gabe fight for their country, as well as personal battles of darkness and guilt, while navigating their growing attraction for each other.

Where Dandelions Bloom offers a unique perspective on the Civil War, through the eyes of Cassie and Gabe. I felt like this book dealt with Army life realistically, from the lack of cleanliness, to the long periods of down time.

Cassie is a courageous taking on the role of a lifetime, fighting for her country and eventually serving as a Pinkerton. She is clever and strong, earning the respect of many of  her fellow soldiers.

Gabe is a strong young man who follows his dream of capturing images, he is haunted by guilt from his past, wondering if in hindsight he could have done more. Though a city boy, he can hold his own in a fight. He is a good friend, and admires Cassie's bravery and ingenuity.

Overall, an enjoyable read, with a different view of the Civil War. There were moments that were hard to read because of the subject matter, but also humor as well. I liked Jonas and his endearingly annoying talkative ways. Strong lead characters who must overcome challenges physical and emotional, brought together by the war.

I received a complimentary copy of this book. Opinions expressed in this review are completely my own.
Posted by Faith at 1:51 PM