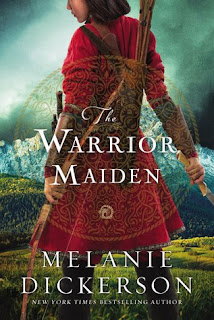 Melanie Dickerson takes the classic legend of Mulan, transporting it to Lithuania and into the Hagenheim Universe. I was so excited when I heard that the next book in the Hagenheim Dynasty was Mulan. I love how Ms. Dickerson has been embracing more diverse heroes and heroines with the additions of Mulan and Aladdin. Mulan has always been one of my favorite stories because of her bravery, patriotism, and loyalty to her family, as well as her Asian ethnicity (I'm Asian-American).

Mulan bravely volunteers to serve her country in place of her deceased father in order to protect her mother from being thrown out of her home. Skilled with a bow, she is small and quick, with a wide streak of stubborn. I admired her faith and relationship with her mother, though there is not a lot between them in the book, it is clear that her mother is a kind, godly woman.

Wolfgang and his brother Steffan are sent to fight alongside the Lithuanians against the Teutonic Knights, but Steffan instead chooses to fight with the Teutonic Knights. Wolfgang stays true to his duty, determined to act honorably in his obligations and in battle. He is a fierce fighter, faithful friend, and noble to the core.

Overall, a riveting story, with a worthy heroine and hero who bravely stand up for what they believe in. I found some of the facets of the story interesting in how they seemed to be drawing a parallel between events of the story and modern day legalism and Christianity in politics. There are strong themes of family, faith, and second chances. Plenty of action keeps the story going, I liked how the book was realistic about Mulan's strengths and weaknesses. A must read for fans of Melanie Dickerson's Hagenheim Series!

I received a complimentary copy of this book. Opinions expressed in this review are completely my own.
Posted by Faith at 12:00 AM