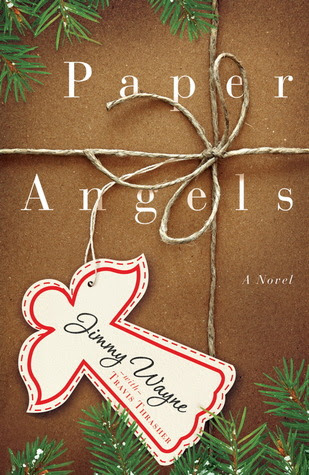 My Review: A Christmas tale that will tug on your heart strings.

Thomas is a 15 year old young man who has had to grow up fast, since leaving their alcoholic father and starting over, his mother has struggled to keep food on the table for Thomas and his little sister, so she signs them up for the Angel Tree.
Kevin is a well to do middle aged man who owns and operates his own design business. When the bad economy deals him a tough blow, Kevin is determined to cut back, but his wife urges him to pick up an angel from the Angel Tree.
Kevin and Thomas embark on a Christmas journey that neither of them will forget!

The reason I that I picked this book up, was honestly that I'm a country music fan and I've really enjoyed many of Jimmy Wayne's songs, especially Paper Angels, the song after which this book is titled. I've heard Jimmy Wayne's touching story about how he received an Angel Tree gift when he was younger, and how it changed his life. It's so wonderful to know that the author really knows what he is talking about, and that he is truly writing from the heart.

I really liked the characters, Thomas was such a responsible and selfless young man, and the hard times had made him a man before his time. And I thought that all the characters were written in a heartfelt, and gripping way.

Overall a beautiful Christmas book, that shows how both the giver and the receiver are both blessed through a gift. Definitely a heartfelt read for the Christmas season.

I received this book from the publisher in return for an honest review. Thanks!