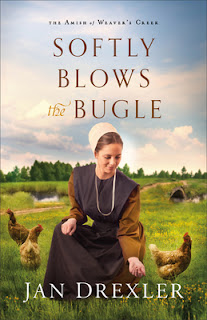 Review:
Elizabeth Kaufman was relieved to hear that her husband would not return from war, now a widow she has returned to her Amish roots and is determined never to marry or be under  man's thumb again.
The end of the war brings the return of her brother, and along with him an Englisher friend, Aaron Zook, who is bent on heading West.  Also new to the valley is Solomon Mast, who has bought the neighboring property, and has his eye set on marriage.
The third in a series, but it can be read as a stand alone. Well researched I think that it did a great job of showing what Amish communities might have been like in the later 1800's. The story was engaging and fast paced, I like how it follows up on characters from the previous books. But it was very difficult to see Elizabeth headed into a disaster after already having gone through so much. Plus, I strongly dislike being inside the bad guy's head, especially this one. He was so cold and calculating, I know why his chapters were important to the plot, but I just hated him as a person SO much!
Overall, this was an engaging read, with well developed characters, and an entertaining plot making for a quick read. Strong themes of faith, and community. A wonderful read for fans of historical and Amish fiction!
I received a complimentary copy of this book. Opinions expressed in this review are completely my own.
Posted by Faith at 5:34 PM