The Light at Wyndcliff by Sarah E. Ladd ~ Review 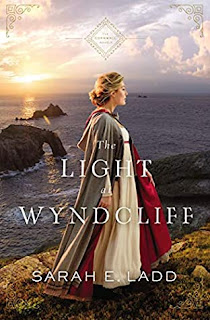 Lucie's Review:
Intrigue and romance on the Cornwall coast.
Liam Twethewey comes to Wyndcliff Hall to claim his inheritance left to him by his great-uncle. But the Hall holds many secrets, as the coast is a frequent bearer of tragedy, and the location of many a shipwreck.
Evelyn is the granddaughter of Wyndcliff's steward, she has lived her life along the coast and inside its halls. Her family is much reduced in circumstance than they previously were, her future is unclear, but she longs for a family and a place to belong.
After meeting on the moors, Liam and Evelyn become fast friends s they work together to unravel the terrible secrets of Wyndcliff. I liked that Liam is a willing learner, he wants to be hands on, and work hard to make his inheritance a success. He comes to rely on Evelyn as one of the few people he can turn to, and I admired his drive to get to the bottom of things.
Overall, a riveting read set along the coast. Great character development and interaction, I loved how Evelyn and Liam got to know each other as they worked together to discover the secrets. Well paced with an engaging plot, can be read as part of the series, or as a stand alone! Well worth the read!
I received a complimentary copy of this book. Opinions expressed in this review are completely my own.
Posted by Faith at 5:43 PM