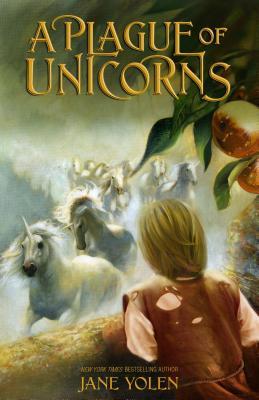 Cranford Abbey is plagued with unicorns who eat the treasured Hosannah apples, that are known to make the most heavenly cider.
James is a young boy, who always has a question at the tip of his tongue, yet no one is willing to take the time to answer them. When his father is lost during the crusades, James is sent to Cranford to learn from the esteemed monks.
Will he have the answer to the abbey's unicorn problem?

This a charming fairy tale like story, by skilled storyteller Jane Yolen. Laced with humor, and a charm that brought a smile to my face, I was quickly engaged  by this charming read. But as the book progressed I felt that it became rather drawn out and many of the endearing characters that I had enjoyed in the first part of the book all but disappeared, and even the tone of the book seemed to change and it began to feel more choppy.

Overall, this was a nice book, and still very enjoyable for children. Yet I felt that it lost momentum part way through, and never quite regained it, even near the end, which I thought was more than a bit rushed. James is a smart young man, and I liked how he had a hunger for learning. In the end though I really feel like this story has a lot more potential than was showcased in this book, I heard that it was previously published in a shorter version, so I wonder if that is why it didn't quite flow well in my personal opinion. But it really is a charming story for fans of fairy tales and unicorns.

Disclosure of Material Connection: I received one or more of the products or services mentioned above for free in the hope that I would mention it on my blog. Regardless, I only recommend products or services I use personally and believe will be good for my readers. I am disclosing this in accordance with the Federal Trade Commission's 16 CFR, Part 255: "Guides Concerning the Use of Endorsements and testimonials in Advertising."
Posted by Faith at 12:25 AM