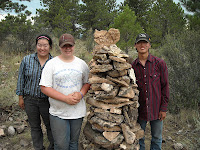 Car rides provide a great environment for getting some great reading done! I will be headed out west to visit my relatives for a few weeks which I hope will be a great experience. Last time I went, my brother and my cousin built a sheepherder's monument, reminiscent of the ones made centuries ago, originating among sheepherders in Spain who were bored so they decided to build monuments much the one I made with my brother and cousin. They are not that common anymore due to weather, vandalism, and elk mistaking them for scratching posts! And yes, we made it because we were bored when babysitting a wildfire and putting out hotspots.

But enough about that and on to the books!

I am so excited to read The Haven by Suzanne Woods Fisher, I have been looking forward to hearing Sadie's story since reading The Keeper, which I loved!

On a warm spring day, Sadie Lapp returns home to her quiet, unassertive life in Stoney Ridge after spending the winter in Ohio.

Gideon Smucker, an awkward schoolteacher, has been in love with Sadie since childhood and eagerly awaits her return. But does Sadie feel the same about him?

Will Stoltz, a charming and impetuous college student, has been banished for a semester and sent to babysit endangered peregrine falcons nesting at the Lapp farm. He'd rather be anywhere else . . . until he befriends Sadie.

As the hopes and ambitions of these three young people converge, life in Stoney Ridge may never be the same.

Once again, bestselling author Suzanne Woods Fisher intrigues and delights with a story that explores the bonds of friendship, family, and true love in this captivating series.

I have been so excited to read Angle of the Cove because soomething about it just reminds me of my all time favorite book, Christy!

In the first book in the Smoky Mountain Dreams series, acclaimed author Sandra Robbins weaves a tale of love, loss, and God's faithfulness in every circumstance.
Anna Prentiss has never wanted to be anything but a nurse. Before she can start school in New York, however, her brother sends her to Cades Cove, deep in the Smoky Mountains, to spend a summer apprenticing to the local midwife. Anna is determined to prove herself and then head to the big city.
But nothing could have prepared Anna for the beauty of the Cove, or the community and friendships she finds there. And she certainly wasn?t prepared for Simon Martin, the handsome young minister, or the feelings he arouses in her. Has God's plan for Anna changed? Or is she just starting to hear Him clearly?

So now it's your turn, what are YOU reading this weekend?

Email ThisBlogThis!Share to TwitterShare to FacebookShare to Pinterest
Labels: What I'm Reading ~ Weekend